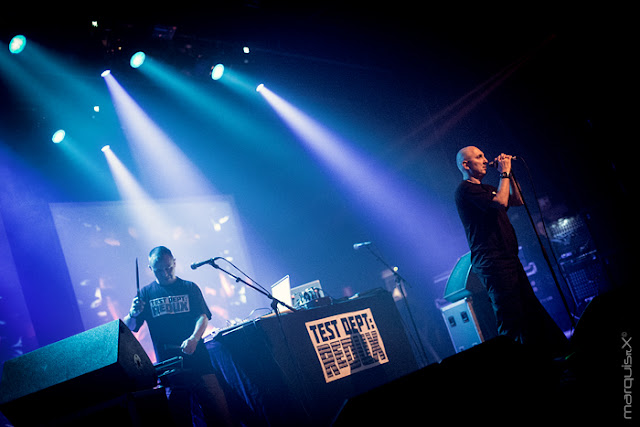 Test Dept revisiting/revisioning their back catalogue. thanks to Jofa and Polewka for recording and sharing on DIME. Excellent sound.

Titled 'UFoF:v2' the performance is a live re-mix and re-imagining by the two founder members of Test Dept - Paul Jamrozy and Graham Cunnington – the tracks performed are taken from Test Dept's own sound and visual archive from their classic agitprop 1986 album ‘The Unacceptable Face of Freedom’* and earlier material.

Originally UFoF was an expression of the rage and frustration felt by a large section of society towards the brutal policies and consequences of the UK's Prime Minister Margaret Thatcher (1979>1990), which has now, once again, gained a powerful relevance to our current circumstances within the wider globalised economic and militaristic order in these recession hit times.

The performance reworks political themes for the new millennium and bringing up to date the methods and techniques that made Test Dept pioneers of a highly original and radical approach to music creation and found sound collage.

TD:R create a dense, powerful, vibrant soundtrack for our time, utilising sound and image samples from the extensive Test Dept back-catalogue; enhanced with new sounds, audio-visual documentation, and the duo's live vocals and percussion. Their channelling of the personal anger and frustration they still experience remains as potent and caustic as before.

Following the melt down of the West's banking infrastructure, and the revelation of the consequences of corporate greed and free-market 'shock therapy' tactics, it is an apt time to revisit the radicalism of Test Dept's dystopian vision of the future as laid out in the seminal album, The Unacceptable Face of Freedom.

* "The Unacceptable Face of Freedom", was the pejorative term used by Thatcher's Home Secretary Leon Britton during the 1984/5 miner's strike. The right of people to protect their jobs and futures was seen as a liberty too far by the right wing political establishment of the time.

This is the 16-bit version of this recording