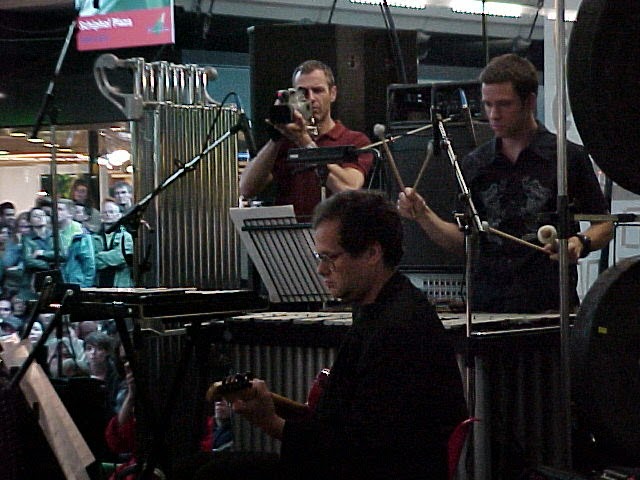 The complete radio broadcast. Thanks to the original uploader on Dime.

Bang on a Can on "Music for Airports":

"When we first heard Music for Airports in the late seventies/early eighties it was like a door cracking open. This record-long piece was mesmerizing, dreamy, intense and meant to be played in or thought of as fitting into a specific environment. It was a redefinition of how we relate to music in our everyday lives. Brian Eno was exploring the question of where music could go. Could its home lie somewhere outside of the muzak of elevators and dentists' offices and outside of the concert hall as well? Could it exist somewhere in between? Eno was essentially defining Ambient music. Twenty years ago there were no Ambient departments in record stores. There were no New Age or techno sections, no chill rooms. Music for Airports kicked off a whole web of musics that hadn't existed previously. But the unique factor about Eno's work was that although it could and can exist in the background of everyday life it is music that carries a potency and integrity that goes far beyond the incidental. It's music that is carefully, beautifully, brilliantly constructed and its compositional techniques rival the most intricate of symphonies. What Eno didn't imagine was that his piece would be realized with live musicians. In his analog studio, methodically stringing out bits of tape and looping them over themselves, he hadn't anticipated that a new generation of musicians would take his music out of the studio and perform it on live instruments in a public forum. Over at Bang on a Can we have always searched for the redefinition of music, exploring the boundaries outside of what is expected. This recording represents a further step in this exploration. After 20 years where does this landmark piece fit into our ever expanding definition? The effect has only begun. The Music for Airports revolution is just beginning to unfold. The live realization of Music for Airports stays close to the source. To the core group of the Bang on a Can All-Stars we've added voices, brass, winds and pipa, filling out the orchestra of sound that emerged in our minds from Eno's original synthesized recording. We have had the great pleasure of sharing the project plans with Brian Eno along the way. We are indebted to him for giving us the experience of getting inside and out of this monumental work". - Michael Gordon, David Lang, Julia Wolfe

Email ThisBlogThis!Share to TwitterShare to FacebookShare to Pinterest
Labels: Bang On A Can, Brian Eno