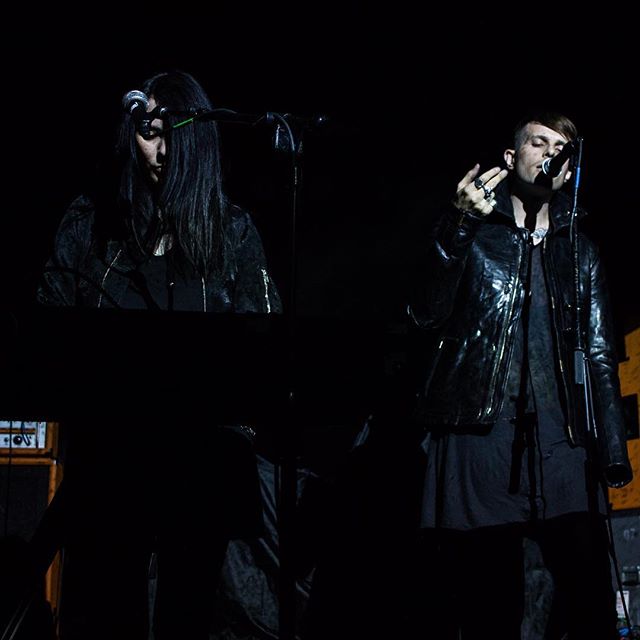 Excellent Recording- Thanks to mixter_ for sharing on Dime.

Support for The Jesus And Mary Chain

Shoutouts: To fellow tapers blg, eric and coolerluzi who were in attendence and my pal Alan for nabbing the set list.

Cold Cave is the musical outlet of one Wesley Eisold with his trusty girlfriend Amy Lee in tow. The band fills a niche for the disaffected youth that has only recently discovered Joy Division's brilliant yet brief oeuvre. The band has no doubt been aided by music streaming services like Pandora and Spotify. I'm sure that if you programmed a Joy Division playlist, you would invariably hear some Cold Cave tunes once you exhausted the band's 45 or so songs over the course of three hours. Now if you wondered what JD would have sounded like with Shep Pettibone at the controls instead of Martin Hannet, then you get a vague sense of Cold Cave's monochromatic style of gothic dance music. Whereas Ian Curtis expressed a sense of fear, isolation, and despair in his vocal delivery, Eisold expresses an ultra earnest sense of indifference. There are some interesting elements to the synthesizer programming, but only momentarily as the sequences are lost in a rudimentary vocal delivery that never changes key from song to song only volume and to a lesser degree pitch. It's very contrived sounding and more than completely reminescent of New Order's Movement and what was played in L.A. (Scream, Club With No Name) and San Diego (Soma, Red Tape) in the underground goth and industrial clubs during the mid 80's to mid 90's. The band wasted no time in pouring through seven songs in the course of 30 or so minutes. Wesley appeared to be rather engaging with the few fans in the audience. I'm not sure if it's Amy's place to speak or not. She most certainly did not. I'm really not sure how this outfit has become so popular opening for NIN / Soundgarden last summer while very talented acts like IAMX and Big Black Delta remain grossly overlooked. Sorry, just my 2 cents.

I decided to set up shop exactly where I was for Lord Huron the month prior with similar results (fortunately). The band (thankfully) played a very short set. The recording is pretty close to perfect in terms of what my humble equipment and primitive mastering skills can provide. Wesley's vocal's are clear, if unintelligible, and in the front of the synths. There is a vague amount of background chatter than can be heard somewhere in the midst of the sequences. There is very little in the way of crowd noise. Minor amounts of clapping and cheering between the songs only.

The Quietus wrote a pretty insight article about Cold Cave some six years ago. Since the band hasn't really changed (read: developed) that much, it could have been written last Tuesday.

I couldn't have put it any better than this.