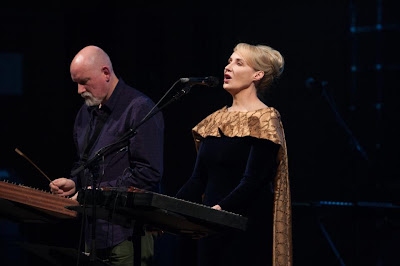 Another offering of ianmacd on DIME. Excellent as usual.

Six gigs, five countries, two continents and a combination of planes, trains
and automobiles: that's the intermediate balance after this evening's show in
Cologne, in the sumptuous Kölner Philharmonie. Not much to look at from the
outside, it has a well-designed auditorium that manages to retain a surprising
sense of intimacy for a hall of its size (2,000 people).

It's been a week since my last gig, in Frankfurt, and my batteries have had
some time to recharge. I'm feeling fresh again and looking forward to
tonight's gig as I drive east across the Netherlands for some fun, fun, fun on
the easterly neighbour's Autobahn.

I make it to Cologne at 17:30 and park conveniently under the venue. A few
fans are already congregating outside, perhaps those who failed to secure a
ticket for this, the final in a series of five 'ausgekauft' gigs in German
cities.

After a walk around the Altstadt and a gaze as the imposing, ever-impressive
Dom (cathedral), there's just enough time to work my way through a
jägerschnitzel on a heated terrace with a view of the Rhine, as I wait for
Timo to show up.

When Timo arrives, we catch up on the gigs of the last week. He's been to
Berlin and Munich in the meantime, skipping only Hamburg on the German leg of
the tour.

After dinner, we make our way to the venue and I don the taper's armour in
the toilets. I then file down to block B for my seat in the third row, a
superb location directly in front of Mr. Perry.

There are still a few minutes to go, so I take a few photos of the stage and
the seats behind me, mindful of the raw materials needed by fellow DIME member
jaraslesny to produce artwork for my impending recording.

Unbeknownst to me, I happen to have wandered into just about the strictest
gigging environment I have ever encountered, and I almost blow my cover before
I've even turned on my equipment by attracting the unwanted attention of a
member of the venue's staff, who chastises me for taking photos of an
uninhabited stage and the seating behind me. If this is what they're like
before the gig has even started, what's it going to be like fifteen minutes
from now? Clearly, I will have to be very, very discreet this evening.

David Kuckhermann kicks off at 20:00. You could almost set your timepiece by
his arrival on stage.

Here as in Brussels, he is joined after the first piece by Siberian
multi-instrumentalist, Vladiswar Nadishana, who enriches the experience with
bamboo flute and hang.

Although Dead Can Dance are yet to vary their set at all from one night to the
next, the Kuckhermann performances are less predictable. Mostly, he performs
solo, but is joined on a number of dates by Nadishana and in Frankfurt,
saxophonist Holger Raddatz accompanied him on the final number. It's a welcome
variable in an otherwise static sequence of events.

The enthralling Jew's harp solo performed by Nadishana in Brussels makes way
tonight for a similar solo on the kou xiang, which the Internet will tell you
is a Chinese cross between a Jew's harp, a didgeridoo and a synthesiser. And
if that doesn't make you curious, nothing will.

The lights dim at 21:00 for the arrival of Dead Can Dance.

This really is a nice venue. The band must descend the stairs to the left of
the stage, passing under the huge organ pipes in full view as they make their
way to the stage. It's just a little bit different, visually appealing and
beats having them emerge yet again from the shadows at the back of the stage.

From this point forwards, it's business as usual with the polished,
well-rehearsed set.

Brendan seems to be in a particularly jovial mood this evening, which is a
nice change. Lisa is as happy as ever, smiling at the audience throughout the
show. Astrid, too, beams her way through the set, clearly enjoying the whole
experience of touring as part of the band.

'The Host Of Seraphim' starts with a rich low end to the organ tone this
evening. It sounds particularly good.

'Ime Prezakias', which follows it, also stands out by virtue of the
impassioned ending that Brendan grafts onto the song. It's nice to see one of
the pieces still evolving like this.

Once upon a time, half of a live Dead Can Dance set would consist of
half-written experimental pieces that would shift and change shape from one
night to the next, evolving and maturing in public. More often than not, these
pieces would ultimately be abandoned, never seeing an official release or even
finding their way onto tape in the studio.

These days, things are very different. There are no unreleased original
compositions in the set, unless one counts 'Rising Of The Moon', but even that
is really just the continuing evolution of 'Wandering Star'. As such, any
minor deviations from the established performance template are welcome
surprises.

I manage to remain undetected for the duration of the set, whilst several of
those around me are shut down for being audacious enough to sneak a flashless
snap with a tiny point-and-shoot camera. Rules are rules, I know, but I don't
really understand why they are being quite so stringently enforced. A taper
caught red-handed in this place would likely be hanged, drawn and quartered.

The more shows I attend on this tour, the more I am struck by the number of
instruments that are digitally sampled, rather than played acoustically.

I've mentioned it before, but I continue to long for a real snare for the
marching drums of 'Return Of The She-King'. There's a drummer on stage, so why
not give him a real snare drum to play on that song? Instead, his stick or
foot triggers a digital sample of one. It's not the sound -- that's very true
to life -- it's just vaguely dissatisfying from a visual perspective.

More baffling is why David Kuckhermann plays a zendrum on 'Anabasis'. His
hangs are in the building -- and still warm; he was playing them not an hour
ago! -- so why does he instead trigger samples of them with a MIDI controller?

It's a minor gripe. I just don't understand the rationale for it.

The Philharmonie's steeply staggered seating ensures that virtually everyone
here has a fantastic view of the stage. My seat is phenomenally good and
provides a feast for the eyes from start to finish. It's a little less good
for recording, however, as there isn't an overhead PA in sight. I instead aim
my microphones at the sideways-orientated stacks on either side of the stage.

The resulting recording has a reverberant quality to it that makes it sound as
if I was quite some way back in the auditorium, when I was actually very close
to the stage. In fact, it's a remarkably accurate capture of the sound at my
location, the Schoeps microphones being incredibly faithful to the source.

As ever, samples are included to help you make up your mind.

After the gig, Timo and I cross the road for a quick drink, which inevitably
turns into a slow drink.

I finally leave Cologne at about 01:15, drowsiness already descending upon me.
A hellish journey lies ahead, punctuated by stops to refuel, use the toilet,
imbibe overpriced espresso and take on board provisions of dubious nutritional
value to eat on the way.

I make it as far as the Dutch border, by which point I'm no longer safe to
drive. I park my car between the dozens of lorries, recline my seat and crash
out in seconds. The interior of the car rapidly cools, of course, so I awake
within the hour, freezing cold.

Why am I not in a nice, warm, comfortable hotel bed again? Oh right, to save
some money. Yes, well, I might have kept some cash in my wallet, but I'm
definitely still paying for this, one way or another.

I start driving again, finally pulling up at the front door at 05:20. I'm in
bed by 05:30 and asleep in seconds, unperturbed by the knowledge that two
children will need breakfast and a lunch box prepared about ninety minutes
from now.

Amsterdam to Cologne and back in a day for a gig? I can't recommend it. Get a
hotel. Cologne's a lovely city.