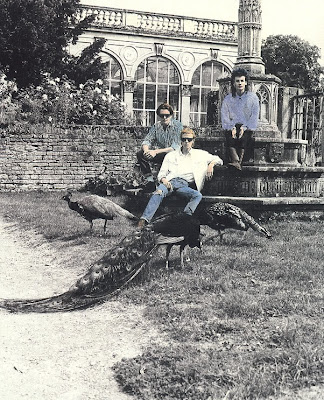 As requested, the two "last" Love & Rockets shows. Thanks to judgesmails for sharing them on DIME.

Love & Rockets had made a formal announcement that they would be disbanding after their two Hollywood shows at the end of the "Lift" tour, so the band and crowd were all well aware of the significance of these concerts.
In fact both shows were professionally recorded for an intended live album, but some dirtbag managed to steal the recordings of both performances after the end of the second show.  Luckily there was an audience recording made during both performances, and I was able to get 2nd generation cassette copies of each show shortly thereafter.

The setlist for both shows was the same as in San Francisco (May 6 - previously torrented).  That show has better sound quality, but these shows have reasonably good sound quality as well and both are worth having for their historical significance.  The crowd is noisy at times, but their enthusiasm is entirely appropriate and I can forgive all of their noise aside from the woman who keeps shouting "Daniel Ash, I love you, you have beautiful  eyes!"  That person is embarassing and annoying, but thankfully she only makes an appearance on the May 10 recording.

Of significance:
- Evidently the band got locked in their dressing room between the main set and encores, and it took 15 minutes to get them out.  David tells the story as they come back onstage, right before "Kundalini Express".
- Janes Addiction drummer and vocal L&R fan Stephen Perkins joins the band for 3 songs during the encores.

Email ThisBlogThis!Share to TwitterShare to FacebookShare to Pinterest
Labels: Love and Rockets