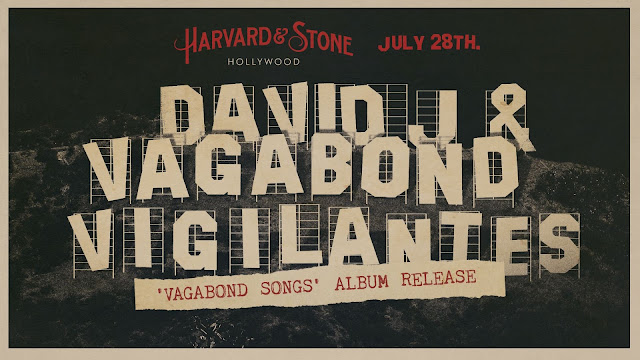 Thanks to mixter_ for taping and sharing on Dime.

David J returns to Los Angeles in support of his latest double album, Vagabond Songs. The album fittingly chronicles the time that he has spent on the road over the last year or so. Even at 60 now, J relentlessly tours the world playing well over 150 shows a year. I have a great deal of respect for Mr. Haskins' work ethic and his dedication to his art form and fans. He is arguably the most affible and accessible member of Bauhaus / Love and Rockets. He can usually be found after each show chatting up his fans, signing covers at the bar or while loading his gear. This night was no exception. While other bands and artists are charging increasingly higher and higher amounts for fifteen minute "meet and greets", David J will come to YOUR HOUSE and play an hour long acoustic set in your living room for a nominal fee. In return you can sell tickets publicly or privately to the event to cover the expense.

Tonight's performance was held in a small trendy bar in Thai Town (East Hollywood). The show was FREE. According to the set list, J was slated to play 14 songs. Due to time constraints it appears that his set was cut short to just under an hour. The Love and Rockets' classics "Rain Bird" and "Holiday on the Moon" were cut as well as the seminal "Bela" and a track titled "Anthem". We did get a Rockets heavy set of five of the ten songs played tonight. David was accompanied by his manager/bassist, Darwin Meiners and Michael Berg on piano. There was a theme of protest throughout the night's performance that was sadly lost on most of the bar's patrons that were intent on chatting and hooking up. The background chatter is very prominent for the first 3 songs until the "sound guy/DJ" chose to turn up the levels (VG-). As the show progresses, the chatter diminishes to a respectable level (EX-). For this reason, I chose to record some six feet away from the right speaker (furthest from the bar).  David's vocals are very clear and the instrumentation is fairly well balanced. The backing instrumentation tracks that Darwin played from his Mac were jarringly loud at times. Also, we get an impromptu Ziggy infused intro to "The Day David Bowie Died" as J tries to sort out his cables and pedals. David elected to play a nylon string classical guitar for the majority of the evening. It gave the performance a very down to earth, folksy feel. Overall, a great performance. I had only wished that he had played longer. Apparently he had to clear the stage for the house band to play some covers for a stripper / burlesque dancer. Oh well!

"Who Killed Mr. Moonlight" in all of its Vaudevillian glory, the Love and Rockets gem "Be The Revolution" from the oft-overlooked "Hot Trip To Heaven" and the plaintive plea of "Everybody Wants To Go To Heaven"! It was like AM/PM! Too much good stuff!

Please support the artist by purchasing his latest album Vagabond Songs or by having him come to your house to play!...