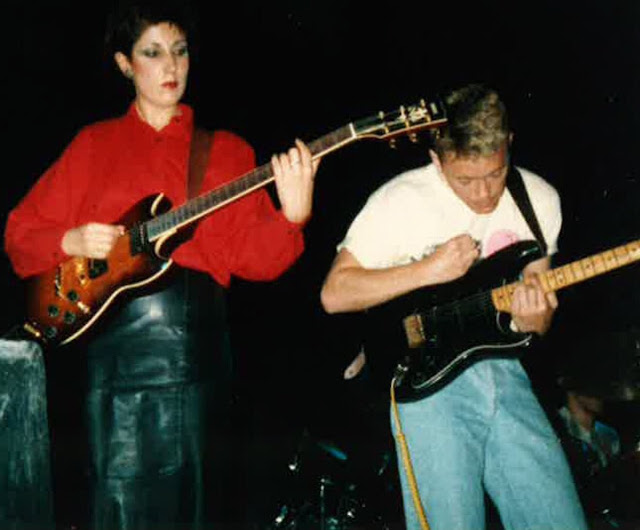 Very good FM broadcast that is floating around for a decade already. Thanks to pythonmonty for sharing it on Dime.


Checking the DIME-bot, i found out that a few different recordings from this
night had been shared here before, ALL with unknown lineage & generation, too
fast running and with around 57 minutes concert length DEFINITELY NOT complete !

This upload has NOTHING to do with those old uploads !

IT'S THE FIRST DIGITAL TRANSFER FROM OUR COMPLETE & UNCUT ANALOG FM-MASTERTAPE, WITH KNOWN LINEAGE AND ALL THE INFORMATIONS AVAILABLE AFTER >26 YEARS !

NEEDLESS TO SAY THIS IS A MAJOR IMPROVEMENT...

Their opening/support act on this tour, "Shark Vegas", was not aired that night.

"You Hurt me" was one of their concert favorites and Bernard Sumner of New Order wanted to
release the track as a single. He also plays guitar at the closing moments of the track. Sumner
co-produced the track with A Certain Ratio's Donald Johnson, who also added vocals to the track.
A different version to this single was also released on Die Toten Hosen's label "Totenkopf".


The "DRS3"-LIVE BROADCAST of the New Order concert was scheduled from 22:00 to 24:00pm - enough time to transmit the whole gig (usually 60 to 85 minutes during this European tour) including
some delay at the beginning, all the possible encores plus some interviews, trivia and so on...

Theatersaal im Volkshaus in Zuerich was - and still is, after the last renovation - a venue
for concerts (the primary use during the 1970/80ies...) that can hold an audience of ~1.100
people bottom floor, all standing (there are a few room pictures included in the folder).

But sadly nearly nobody showed up for this concert. We heard rumours of about 5-10 % of the max.
possible places filled -> 50 to 100 people ! Searching the net we found this short report here:

The band was obviously pissed about the empty venue, and a lot of problems during the soundchecks,
the support act "Shark Vegas" and at the end during their OWN concert - to name just the subsurface
room sound (throughout the whole day really nobody gained control about it...), problems with some
of the band's keyboards and other equipment, buzzing amps, few severe and uncontrollable feedbacks
on every occasion, a partly rowdy & dissatisfied crowd etc. - led to a somehow WEIRD GIG and, even more, to a COMPLETELY WHACKED-OUT AND EXTREMELY FUNNY RADIO BROADCAST, especially the last quarter...

On the other side you'll get a few different sequencer patterns and partly new lyrics in some of
the songs, culminating in track #05. "Sooner Than You Think" with almost completely different
lyrics especially about the country Switzerland and the beautiful girls there - sadly never ever
heard or learned about the interesting word "cunts" as female description - a delicate compliment ?

A LOT MORE TO READ AT THE END OF THIS DESCRIPTION !

FOR THE FIRST TIME OUT OF OUR ARCHIVE,
IN THIS QUALITY AND SHEER VAST SIZE
COMPLETELY UNTRADED - PLEASE ENJOY!


THUS HAVING WRITTEN - WHY WAITING ??


Zürich or Zurich is the largest city in Switzerland and the capital of the canton of Zürich.
It is located in Eastern Switzerland at the northwestern tip of Lake Zürich. While the
municipality itself has 380,500 inhabitants, the Zürich metropolitan area is an urbanised
area of international importance constituted by a population of nearly 2 million inhabitants.
Zürich is a mixed hub for railways, roads, and air traffic. Both Zürich Airport and railway
station are the largest and busiest in the country. In addition to being Switzerland's main
commercial centre, Zürich is sometimes called the Cultural Capital of Switzerland.
An impressive number of museums and art galleries can be found in the city, among which
the Swiss National Museum and the Kunsthaus. Zürich also hosts one of the most important
theatres in the German-speaking world.

The "Theatersaal" was completely renovated in 1994...

pics & scans included in this torrent...


as far as we know NONE of this torrent was used commercially...

All songs by New Order (Sumner/Gilbert/Hook/Morris) unless otherwise specified.

§ -> original tape flip during the applause @ the song end, crossfaded, NO MUSIC was harmed or lost...


All officially released tracks during the radiobroadcast have been omitted.

Further down you'll find an extremely detailed description
of this concert, track-after-track, including some closer
translation of most of the spoken passages after the show...


§ -> Sumner has used the surnames Dicken and Albrecht in the past and had always refused to
explain why he has used different names. He has also been reluctant to discuss his family
background. In 2007, it was revealed his mother had cerebral palsy, and that he had been
adopted by his stepfather John Dickin. Sumner was his mother's maiden name, and is the name
that appears on his birth certificate. The revelations about his past were made in a book
about his life, Bernard Sumner: Confusion: Joy Division, Electronic and New Order Versus
the World by David Nolan, published in 2007 - on which Sumner co-operated.


# RAW FILES - so NO additional NoiseReduction or EQ'ing was used here,
and none of those compressors, Sonic Maximizers or other psychoacoustic
processors - just some of the broadcast-statics reduced , balanced the
stereo channels (just a touch) and finally normalized.


this upload here comes directly from the "Men With Microphones" archives.
if you want to know more about, check the old uploads...lotta stuff to read !

And if there's some interest, maybe there is MORE TO COME...
it just depends on YOUR demeanor, and lotta useful comments ;-)

<< 22:00pm >>
Scheduled "DRS3"-FM-broadcast beginning...
The two hosts - i think Martin Schäfer & Jasmin Kienast (maybe somebody can confirm?) - talked
and played some music out of the studio while waiting for New Order -> THE NOT RECORDED PART...

<< 22:20pm >>
The concert starts finally with some fanfare intro -> RECORDING starts without missing ONE NOTE !

Who saw the darkness?
I felt the devil
I saw those eyes
I ran for the sky
His eyes were dark and brown
He lookes at me like just torn eyes
etc...

The stolen and misused microphone incident:
~ 5:53 A very loud voice yells out three times before the applause starts
~ 6:00 same yeller: "Blue Monday !!"
then you hear a few bass notes played and during this a short fight
roadies versus the yeller to get the damn microphone back...

Hello, everyone, it's nice to be here
I've come so far to see you all
I can see your deep blue eyes

~ 3:01 then the new lyrics mention the "thousand lines away" bit,
and the chorus is "You know we'd love you", repeated a few times.

Switzerland is a wonderful country,
it's full of mountains and leaves and flowers.
We...someone...(summer?),
like it does in England,
the girls in...so much prettier.
But unfortunately, everyone in Basel are cunts.

some of the new lyric transcriptions (thanks a lot!) here:
http://www.new-order.net/no/gigs/nogigs84.html

Taken from the killing ground,
by all dividing hands
With no sense or reason,
they came, they found, they ran
Taking good advantage of all the things I'm told
I washed my hands in innocence when you start taking control

The group then shoot right into Denial.

It's just something I know,
the answer's not there
It comes and it goes and it frightens me

Your life is your own, my life doesn't involve you, boy

Heaven, a gateway of hope

the vocals are good in the mix...they finally found the correct faders ;-)
and it was SEEMINGLY A JOY for Bernhard to shout this
AT the crowd below (or minimum a part of them, there...):

They shortened the song and skipped those lyrics:

You tell me you need me, I'll make it this time
Faith won't devide us if sensations survive
I was sure that I told you it was clear from the face
You've caused me some problems, you've taken my place

Thanks to some of the people responsible for this site, as
i was using a few of the transcriptions & descriptions there:
http://www.new-order.net/no/gigs/nogigs84.html

PLEASE support the artist - and buy all his available stuff...
open recorded and carefully stored over 26 years, mastered etc.pp. by Leo (all thanks go to him...),
transferred, & finally first time uploaded by pythonmonty on Dime, July 02, 2010. This is "MWM 00193"

please consign this info-sheet with the shared music - thanks !