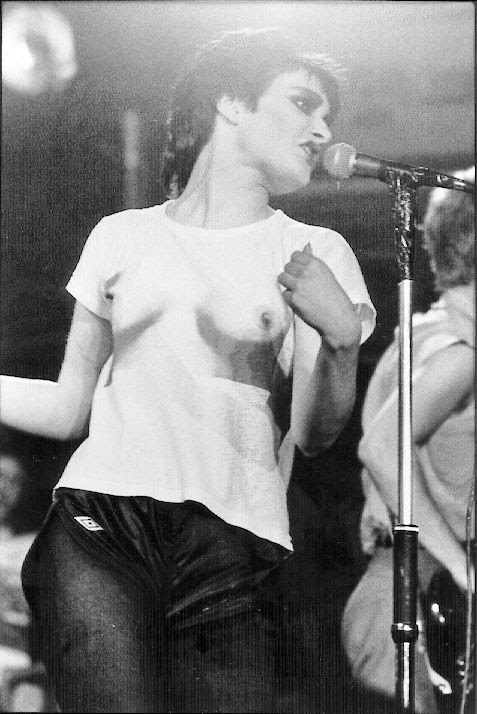 Very good FM captur. Thanks to MikeDreams for sharing it on Dime.

Siouxsie and the Banshees

FYI Juju at #7 the only other album to reach the Top Ten. (A Kiss In The Dreamhouse just missed at 11.)
Two SATB singles hit the Big Dime: Hong Kong Garden went to 7, and Dear Prudence made it up to No. 3.]

Lynden Barber, Melody Maker 02/09/80 -- Meanwhile, most of the audience are more interested in positioning themselves in front of the left-hand stage, where billtopper Siouxsie and the Banshees are due to come on.

They’re not disappointed. Siouxsie’s performance is quite simply one of the most inspiring I’ve ever seen anyone give. She owns the stage, turning the traditional passive sex symbol role of the female singer on its head. She chastises the hordes of 18- to 21-year-old wide-eyed youths reaching their hands out towards her, telling them, "I didn’t say you could talk" like a schoolmistress. Siouxsie is sexual, but in a dominant way, smashing a tambourine against a mike stand and flailing her microphone lead like a whip. The Banshees seem to feed off the atmosphere of near hysteria as they run through powerful versions of most of the songs from "Kaleidoscope", and McGeoch and Budgie add new touches to older songs like "Switch", "Regal Zone" and "Jigsaw Feeling". It’s an overwhelming performance, and I almost panic at the threat of being crushed by people hanging precariously off the scaffolding around the stage....


Rolling on toward Frisco...

Richard Grabel, NME 1980 -- Siouxsie And The Banshees' opening - darkness and squealing feedback, lights revealing Siouxsie posing like Kabuki grotesquerie - is pretentious beyond excuse, and the 'Helter Skelter' it heralds more a butchering than an interpretation.  But 'Playground Twist', which follows, puts things back on track.  It's a spooky, sometimes uncomfortable ride, but well worth the price.

The Banshees' sound is abrasive and chilling, but centered on a beat as deep and natural as a heart pumping.  John McGeoch is a great guitarist.  His sound often reminds me of Keith Levine or Pat Place, yet his own individuality takes it beyond any comparison.

The set careens wildly between extremes of mood and sound, from soft, acoustic guitar fables like 'Christine' to raucous, screeching attacks of murky noise.  'Israel' is a standout, McGeoch getting a stunning, crystalline sound and Siouxsie's singing clear, almost pretty, yet assertive and disturbing.  'Red Light' is another, with Severin moving to synthesiser to create an ominous undercurrent, the song full of texture and exciting rhythm.

The visual contrast of the dark haired Siouxsie and her three dyed-blond men is contrived, but it is also stylish and effective, and much a relief after 999's stodgy orthodoxy.  The Banshees sometimes let the image, presence and atmosphere win out over ideas, feelings and content.  But they have the skill to succeed in creating just the right atmosphere - from horror-film menace to 'Happy House' exhilaration.  They are sometimes deliberately ugly, but that doesn't mean they deny beauty or its uses.

Siouxsie thumbs her nose at the audience a few times, in fun, but there's no suggestion of indifference in her attitude.  I would prefer less of her screeching and more of her singing (she has a good voice when she wants to use it), but there is logic to her choices.  She seems in touch with her audience and with herself.

They get two encores, not a proforma response and not merely fan adulation.  They played a long and varied set, and along the way lost some of the audience.  But their music has only a few handles to grab and in it, beauty and ugliness play an ironic push-pull game.  Those who stayed with it felt the rewards.

JC: I first saw Siouxsie & The Banshees play at the California Hall, I think in 1980. It was one of the hottest nights I’ve ever experienced in San Francisco, and they’d stuffed that place to the maximum. People were passing out.

SS: Yep, I remember how hot that was. That was our first time to play in the States, and we’d just played the Whisky in L.A. We had a very special guest who came to see us at the Whisky, and that was Bryan Gregory, the guitarist from the Cramps.

JC: Ah, yes, the man with the bone necklace.

Cheers for all the dear Siouxsie!

(Never Too Late For Early Dining Out On)
Happy Thanksgiving Eve White/Eve Black!

- Requests are made from the stage from SATB to have the monitors turned up, and for the crowd to stop throwing shit at them and fists at each other.

(Before Red Over White) Siouxsie: "If you want to fight, just beat your head on the floor."