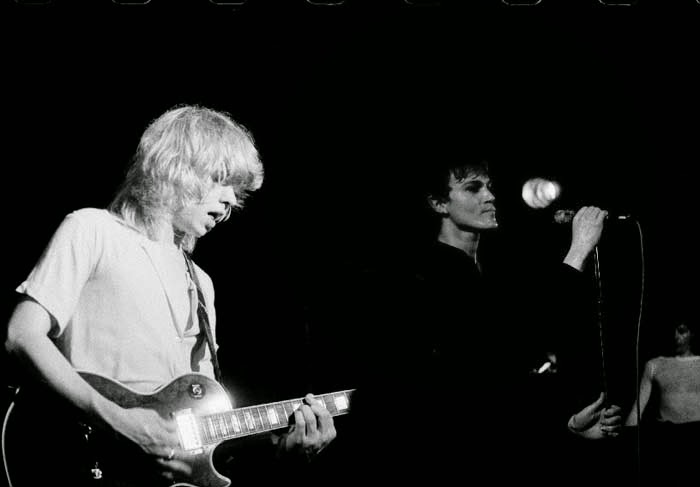 Very Good FM broadcast. Thans to the original uploader and the person who remastered it.

Soundforge was used to correct the speed, and nothing else, including bb's notes:

I got this in trade for more than 25 years,first copy from master tape,excellent sound.Good old days with the one and only Ultravox front man John Foxx. Great performance with a lot of electronics and violin parts.I think,this is one of the best performances from early Ultravox that you can get.Enjoy it!
Some songs are from John Foxx solo albums and I`m sure, you never heard the Ultravox versions.I think the track 09.Radio Beach is never released on any  album from Ultravox or John Foxx solo work.

remaster notes:
this was posted on Dec. 2008 by pernod. This appears to be either a different date or show than listed, since they played 2 shows in Boston on March 3rd and 2 more on the 4th.
The BBC broadcast posted a few times before is from one of those shows, and that is an edited version of the show missing about 20 min. this doesn't sound like that show. If it's from Buffalo, it's probably a day or two before or after the listed date.
It needed speed correction (again) so I slowed it by 9.5 cents, it needed retracking, since several tracks began with several seconds of applause, and the levels were recorded too high with
clipping throughout. (not horribly, but noticably) there were also short (about .005 sec.) gaps at most of the track breaks. not any more. there were also some problems in the right side during
some parts of "blue light" (or else the soundman doesn't care much for David Gilmour titles) so I monoized some short sections to cover up the missing sound without ruining it. this was an almost-deleter when I got it. Now it's considerably better, glad I remastered instead of deleted (I can't listen to pepped Ultravox, it just didn't sound like them before). and listening to it as I write this info text, it
sounds pretty decent (after 4 tries to get the speed to sound right, this is the only one to get posted) I also cut out a very short section of recorder turn-on noise at the start of track 9 (only about .01 of
a second) I think I got the speed right, this Ultravox band has a very distinct tone and sound to them, especially John Foxx.
I've heard enough of this tour to know what it should sound like. I wouldn't be able to attempt doing this to a Jack DeJohnette's Directions recording. I think anyone who heard this before will
find this more than a little improvement.
I was able to splice tracks 10 and 11 quite inconspicuously, you may not even notice the splice if you're not listening carefully. and also made every song into one track as follows:
runtime: 68:58

this adds about 24 seconds of music to the previous posting, and some of the finest spent 24 seconds an Ultravox fan can hope for, because now you're hearing them play in normal key.
Do not sell this recording. trade freely and losslessly.

Email ThisBlogThis!Share to TwitterShare to FacebookShare to Pinterest
Labels: Ultravox