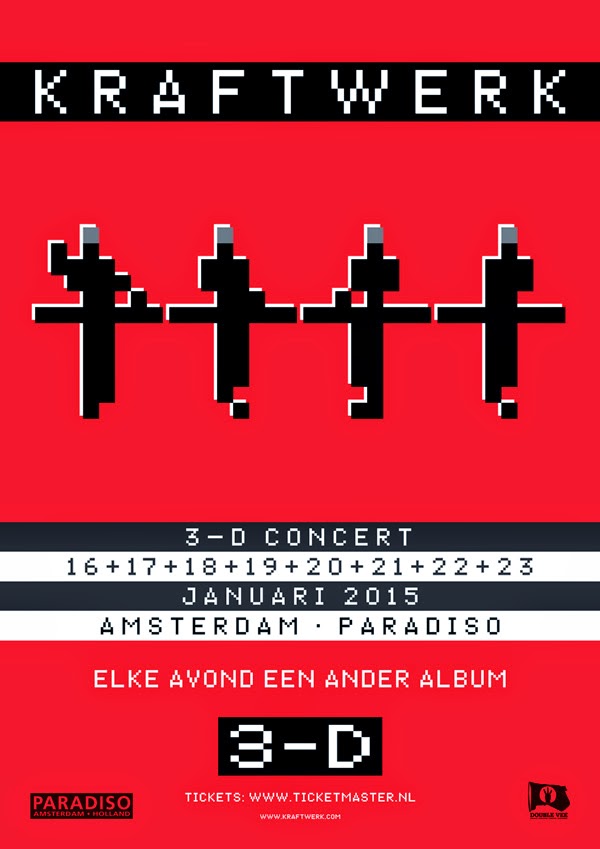 Huge Thanks to ianmacd for taping the entire catalogue series of concerts in Amsterdam and sharing them on Dime.

Type: Audience master, recorded 2 metres back from the front of the stage,
left of centre and directly in front of Ralf Hütter.

I've really been looking forward to these gigs. The opportunity to see one of
my favourite bands perform an eight night, full repertoire residency at the
Paradiso, just a ten minute bike ride from my house, is a once-in-a-lifetime
event.

I had considered making the pilgrimage to one of these residencies in the
past, most seriously when the band announced they would be playing their first
home town shows in 20 years in Düsseldorf a couple of years ago, but it would
have been impractical to travel back and forth every day and too great a
commitment to remain there for a week (not to mention the expense involved).

In the end, it also turned out to be very hard to obtain tickets for the
shows, as it has for most of these residencies that the band have played
around the world. In most cities that I am aware of, tickets have been limited
to two per person across the whole residency, due to the concerts taking place
in art galleries and other atypical venues that don't usually host concerts
and have limited space.

In the case of the Tate Modern in London, the demand for tickets even crashed
the venue's web site, which predictably wasn't designed to cope with the
large number of people simultaneously trying to purchase tickets.

The spoilt child and perfectionist in me wasn't prepared to travel
internationally for just two shows from any particular run, so I was very
happy when in 2013 the band finally announced two 'best of' shows in this
country at the strangely chosen Evoluon in Eindhoven.

The shows sold out almost immediately, which caused the addition of a further
two shows to take place later the same evenings. The organisers  somehow also
found a way to legally cram more people into the building, so extra tickets
for all four shows eventually went on sale.

I went to the original two 'early' shows and had a fantastic time. In fact,
they were highlights of the 2013 gigging calendar. Unfortunately, though, the
set-lists from both nights were identical and didn't feature an integral
album. Although I'd enjoyed them immensely, I found myself now wanting to
attend a full residency more than ever.

It seemed unlikely that the band would ever undertake a full catalogue
residency in a relatively small city like Amsterdam, so I was more than a
little surprised when in September 2014 they announced their intention to do
just that. I was even more surprised at the band's choice of venue: a standard
rock concert venue: the venerable Paradiso.

I would have expected another art gallery or museum, such as the Stedelijk
Museum. Perhaps the band even looked at such sites and ultimately deemed them
unsuitable or couldn't negotiate terms to play there.

On the other hand, if choosing purely from music venues, the Muziekgebouw aan
't IJ or even the Muziektheater would have seemed more likely choices, those
being very modern, very glassy buildings with a strong cultural reputation.

If I look back now at the band's 2014 residencies, however, I can see a clear
trend away from unusual, small capacity venues to more traditional concert
venues. The Paradiso is the latest point to be plotted on that graph.

Having attended the Evoluon shows, I was lucky enough to receive an e-mail
from the promoter with a pre-sale code, allowing me to purchase tickets a
couple of days before they went on sale to the general public.

Mindful of the demand for previous residencies and with my success in
acquiring tickets for Kate Bush's recent Hammersmith residency still fresh in
my memory, I once again enlisted the help of my wife to obtain tickets.

I needn't have worried, though. It turned out to be very easy to purchase
tickets. In fact, it took a number of days before the first of the concerts
sold out, and tickets for the 'Techno Pop' show will transpire to even be
available the day that the residency commences.

The price probably has something to do with that, along with the 1,500 venue
capacity. That's 12,000 tickets at EUR 65 a throw, which could be called
ambitious. On the other hand, the shows are sure to attract people from all
over the country and beyond, with many fans attending multiple shows.

Anyway, I was relieved and excited to have managed to purchase tickets for all
eight shows; and so the four month wait until 16th January began.

And here we are. It's 18:30 and pouring with rain outside the Paradiso as I
file into the makeshift tent where tickets are being exchanged for wristbands
upon proof of one's ID. The tickets have the purchaser's name printed on them,
which has effectively and satisfyingly killed the secondary market stone dead.

Once inside, I take a quick gander at the merchandising stall. It's the usual
array of attire and other stuff, but there's nothing unique to this residency,
so I head downstairs to suit up.

Back upstairs, I enter the main hall. There's a notice on the door, informing
punters that the bar will be closed during the show. Wow. Kraftwerk have
bought out the Friday night bar at the Paradiso. That must have cost a pretty
penny.

So, not only have the band killed the secondary ticket market, ensuring that
all fans pay a fair price to get into the shows, but they've also eliminated
the nuisance of people going in and out for beer during the concert.

I can't tell you how much respect the band have earned from me in doing this.
I'm sure the closed bar is reflected in the ticket price, but who cares? It's
worth it.

I assume my usual position on the left-hand side of the hall and begin the
almost two hour countdown for the band to come on stage.

Security is more in force tonight than it usually is at the Paradiso.
Typically, they're all but invisible, but not this evening. I'm going to have
to be very discreet when I adjust levels.

It quickly becomes clear that the sound is instead emanating from a wall of
speakers behind the projection screen at the back of the stage, so I make a
beeline to the right and go as far as I can before the bodies become too dense
to penetrate. I end up directly in front of Ralf Hütter. This all happens so
quickly that you'll be hard-pressed to notice any of it on the recording.

At least I know the lay of the land now. I won't make the same mistake
tomorrow.

'Autobahn' is performed in its entirety, of course, followed by the most
famous of the band's songs from their other seven albums. 'Autobahn' is such a
short album that the 'best of' segment tonight actually constitutes three
quarters of the show.

The first encore is 'The Robots'. When the curtain goes up, the band have been
replaced by their robot likenesses. It's thus unclear to what extent the song
is performed live, since no-one is manning the consoles. The robots merely
move and gyrate to the music.

There are no other surprises to speak of and the final set bears a strong
resemblance to the one performed in Eindhoven fifteen months ago, with a
couple of songs in the 'best of' section making way for the integral
'Autobahn'.

Some mild EQ was required to tame the bass and bring the high-end up to a
gratifying level of clarity.

The resultant recording is excellent. No fan will be disappointed by this.