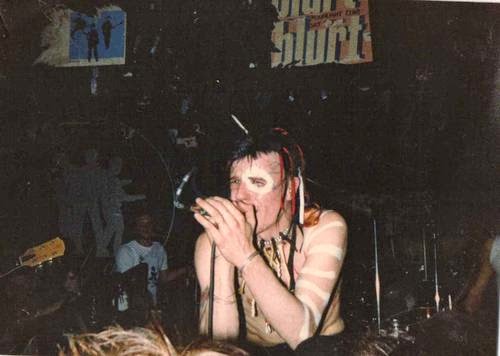 No info on original recorder, this was the first live recording by Southern Death Cult that i "found" at a record fair after seeing them on "The Tube" a UK tv entertainment show back in the day and was the first thing
I transferred to CD after buying a CD writer.
First or second gen copy i would think, long before the days of mp3.
No EQ tweaking just fade in at start and fade out at end

Southern Death Cult emerged from the ashes of Bradford punk band Violation. In place at that time were Aki Nawaz (drums), Barry Jepson (bass), Mick Iles (guitar) and Mick Brady (vocals). Songs in their set included "Boys in Blue" and "Assault & Battery".
This line-up supported The Clash at Bradford's St. George's Hall in 1980.

In 1981, Ian Astbury had moved into a new house in Bradford and reportedly discovered a band rehearsing in the cellar.
Astbury (under the name "Ian Lindsay") started performing alongside David Burrows (guitar), bassist Jepson and drummer Haq Qureshi (a.k.a. Aki Nawaz), and renamed the band Southern Death Cult,
the traditional name of the Native American culture known today technically as the Southeastern Ceremonial Complex.

The Southern Death Cult's first ever performance was at the Mayflower in Bradford which was filmed for a never to be broadcast Yorkshire TV documentary, the band played around 4 songs.
Their first show with a full set was at Bradford's 1 in 12 club in October which was quickly followed by another at Queen's Hall in Bradford, England, on 29 October 1981.
The setlist the band played was: "Crow", "The Girl", "Apache", "Vivisection", "Moya" and "The Crypt", with a bootleg recording of that show in circulation.
A sixth song was sometimes referred to as "War Song", but its real title is unknown, although it used lyrics which later became The Cult's 'Spiritwalker'. The band never played it after 1981.

Southern Death Cult toured heavily in the UK promoting its triple A-side single "Moya/Fatman/The Girl", which had gone to No. 1 on the UK Indie Chart.
The band toured with Theatre of Hate, and then succeeded in getting a slot opening for Bauhaus at the end of 1982, but Astbury disbanded the group after a show on 26 February 1983.

Ian Astbury then went on to form Death Cult, which later became The Cult with Theatre Of Hate's guitarist Billy Duffy.

This gig was recorded 3 days before Ian disbanded the group.

Email ThisBlogThis!Share to TwitterShare to FacebookShare to Pinterest
Labels: The Southern Death Cult