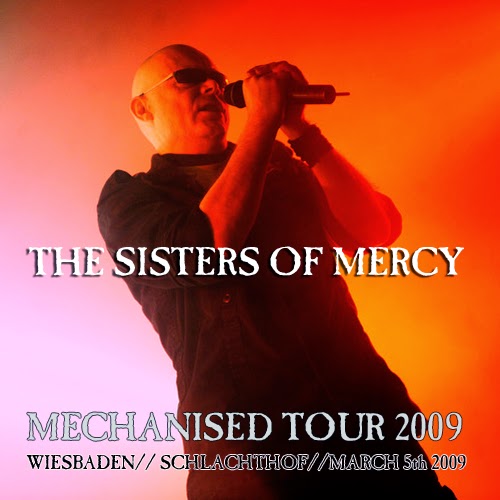 As requested. Thanks to the original uploader. Cover from
https://livecovers.wordpress.com

Notes:
Believe it or not: This was my very first Sisters Of Mercy concert ! Although I know them since 1985 when I first heard them on a Germany radio station namend "Bayern 3". The moderator was the lovely Stefanie Tuecking. The elder Germans know her as the third moderator of the famous TV show "Formel Eins" (and she was the only one of all four moderators who knows what she is talks about - Peter, Ingolf and Kai were only entertainers without any serious music background). This radio broadcast presenting the first Sisters album was the starting point of my "Gothic career" - Bowie-Pop-Eldritch - that the chronological order !

When the Sisters turned back on stage in 1990 I was very disappointed about the new rock sound at that moment. So I've never had the motivation to join any Sisters event. Now, Andrew gets 50 and I thought, I should take the chance, because nobody knows how long the live history of the Sisters continues...

I'm not a fan of such heavy bass and dull sound like it was mixed up at Sisters gigs - my ECM-717 compresses sound too, so overall it was a little too much for my recording. I've done a little EQ-ing to turn down the lower frequencies. Not 100% comparable with those recordings of you "battery box guys", but still really listenable. Give it a try !

A short comment for those of you who are part of the Heartland community: Don't be afraid, the short "Marian" piece cyberbio has posted in the forum is not representive for the whole recording ! - This strange guy has lost his voice after this enthusiastic intermezzo during the German strophe of "Marian" ;-)

Go to the shows and don't sell or buy any live recordings !

wiesbaden
Posted by circle at 15:02