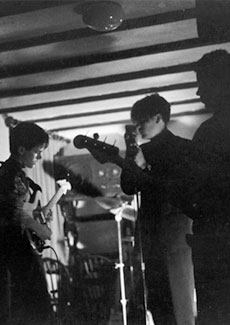 It's been a while since I posted anything by AATT... Thanks to TheMonk for sharing this one on DIME.

It's a SOUNDBOARD recording of a 1983 show at the Fighting Cocks club in Birmingham, England. There are some interesting early incarnations of a couple of songs.

"Shantell" is the long version with all three verses. For the studio version one of the verses had to be edited out because of some inexplicable noise on the original tape.

“The Secret Sea” was probably only played live for the second time during this show and Simon said that the song would be the band’s next single. This version had a different intro missing the characteristic drum intro. Instead, the song began only with acoustic guitar and vocals, bass and drums only joined halfway through the first verse.

Being obviously annoyed by a member of the audience, Simon introduced “Shrine” with the words “This song is called shit, fucking, bollocks actually”.


***PLEASE do NOT encode to mp3 or other lossy formats AND DO NOT SELL!***

Email ThisBlogThis!Share to TwitterShare to FacebookShare to Pinterest
Labels: And Also The Trees