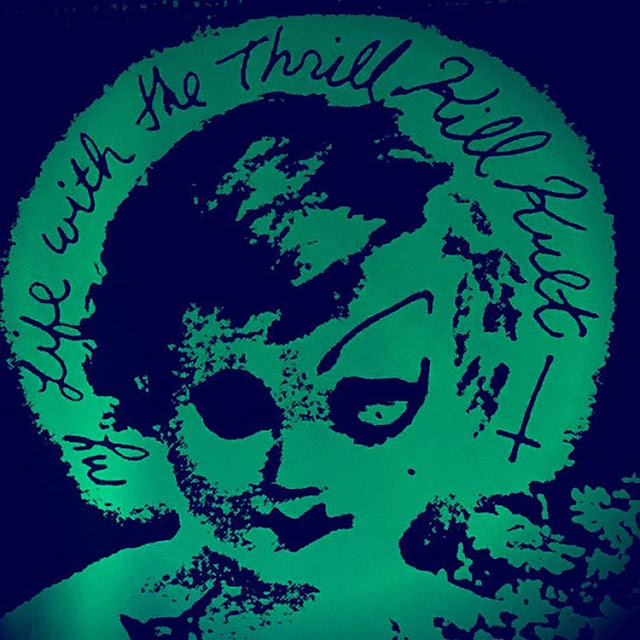 Very Good sounding audience recording . Thanks to J. Free and 01001010 for sharing on Dime.

digitizing notes for both recordings [provided by J-dot; 2016]:

The source for this version was made from my own re-compiled 1st-gen master tapes, shortly after the concert. As with so many live tapes I made back then, I would often consolidate segments from multiple cassettes onto one tape, applying fade-ins, fade-outs, and occasionally, some equalization in the process. If only I still had those original tapes!

These segments happened to be from the same show, and they were on the flip side of the cassette which contained my recording of The Wolfgang Press; so there was no reason to not digitize them at the same time. The sound is a bit rough to my ears for the Thrill Kill Kult set, but I attribute that to the fact that they incorporated a lot of samples in their music, and I don’t think it translated that well to the recording. The sound for Nitzer Ebb fares a bit better, I think.

These were bookend sets for a set in the adjacent venue (Seventh Street Entry), which featured The Legendary Pink Dots - who walked on stage minutes after the Thrill Kill Kult ended their set. Nitzer Ebb was the headliner in First Avenue, and went on stage while The Legendary Pink Dots were playing in the smaller room next door. Since I was recording The Legendary Pink Dots, I was only able to catch the very last song by Nitzer Ebb, for which I never did get a title. All in all, it was a pretty good night of music, and it seems like a miracle that my batteries held up the whole time.

[additional notes: 01001010]:
These shows have never been digitized before, so this is their first time in circulation. The Legendary Pink Dots set was previously digitized, and *may* have been shared on DIME in the past, but I couldn’t find any record of it in the bot-list.

Dedicated to tapesfor2, who had this to say about my efforts to preserve the Sonic Archives tape collection:
"You shouldn't have. His recordings were at 'best' personal souvenirs. They were not quality recordings. They should not be shared. Those tapes belong on a waste dump."

Audio sample:
Approx. 30 seconds each of:
...And This is What the Devil Does!
Nitzer Ebb encore

Email ThisBlogThis!Share to TwitterShare to FacebookShare to Pinterest
Labels: My Life With The Thrill Kill Kult, Nitzer Ebb