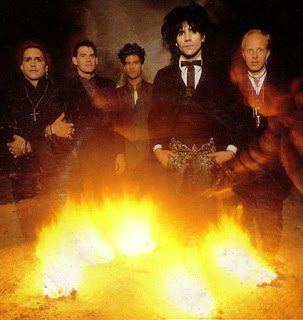 
This is my best-sounding recording of a "Happy Planet" era Wall of Voodoo show - it's certainly recorded from the
soundboard, and the lack of tape hiss makes me think that this was originally transferred to CD from a
low-generation source.  The mix is really weird for the first minute of "When the Lights Go Out", but it evens
out from there.

- There are three "improv" style songs in the set - these weird one-off songs were a hallmark of the Andy Prieboy
era.

- Although it wasn't officially released for several more years, "Shouldn't Have Given Him a Gun For
Christmas" sounds surprisingly similar to the studio version.  Andy even sings the snippet of the drunken
"O Tannenbaum" that was sampled from another source in the studio version.

- "Mexican Radio" is performed in its traditional version, as opposed to the "heavy metal" aka "boogie" version
that the band often played during this era.

Email ThisBlogThis!Share to TwitterShare to FacebookShare to Pinterest
Labels: Wall Of Voodoo