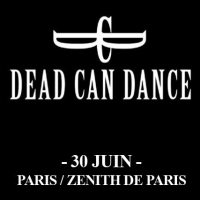 Thanks to ianmacd for sharing his recording on Dime.

I leave the dreary Dutch weather behind and catch the Thalys train to Paris,
where the city is basking in glorious sunshine and it's considerably warmer.

After checking into my hotel, I head over to Place Saint-Germain-des-Prés and
spend the afternoon sitting outside Café de Flore, drinking freshly squeezed
lemon juice and watching the stylish Parisians walk by. It's the perfect way
to while away the afternoon.

And with the afternoon thusly dispensed of, it's time to catch the Métro over
to Porte de Pantin. After a quick phone call home to say goodnight to my
children, I saunter along the tree-lined avenue that leads to Zénith de Paris
(a.k.a. Le Zénith) and find Timo waiting for me.

The band have sold out this huge 6,000+ seat venue tonight: an impressive
feat. Unfortunately, it's not a terribly pleasant place, being strongly
reminiscent of an American cinema complex, complete with ushers and people
vending ice-cream in the break between the support and the headliner. Worst of
all, though, is the unbearable heat. It's like a furnace in here.

Things tonight are running half an hour ahead of the usual schedule. David
Kuckhermann therefore comes on at 19:30 and surprises me once again by
inviting yet another guest to join him on stage for a duet. This time, it's
the turn of Céline Wadier, who provides vocals on 'The Sound Of Viborg'. And
so another unique recording is born.

Dead Can Dance follow at 20:30 and work through their now more than familiar
set. Even the bodily motion of the performers follows the same choreographed
script from one night to the next, with Jules Maxwell consistently lurching to
his left as he belts out the synthesised brass of 'Amnesia', and Astrid
Williamson's fingers performing the same graceful glide over the keys during
that song's final bars.

The band are clearly in good spirits and enjoying the concert to the full. As
in Amsterdam, the performance seems to have an edge that was missing on
earlier dates.

The show slowly becomes a standing event during the encores, with masses of
people making their way down to the foot of the stage to dance and take photos
of their heroes. I'm forced to rise to my feet, too, in order to maintain any
semblance of a direct line to the PA.

There's a minor set-list change tonight, too, but don't get your hopes up too
high.

'Return Of The She-King is preceded by Gerrard leading in an impromptu
rendition of 'Happy Birthday' for Perry, who turned 54 today. He blows her a
kiss in return.

I can't say for sure whether Dead Can Dance were as enjoyable as my afternoon
on the terrace of Café de Flore, wrapping my tongue around a Chocolat
Liégeois, but at least the experience wasn't miserable or boring. The gig
passed by relatively quickly, even with the awful heat to contend with.

The result is a recording with a beefy bass, but not overpoweringly so. It's
surprisingly pleasant to listen to and I'm happy with how the recording has
turned out.


DeadDanceattheZenith13
Posted by circle at 13:27