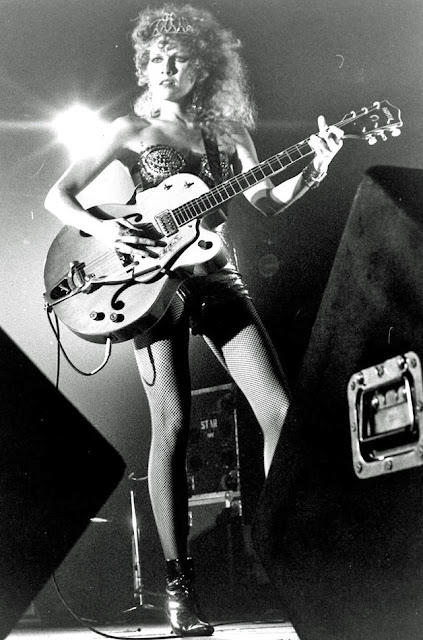 Ivy's Birthday was last week, here's something to remember us her stunning guitar work.

Very good to excellent sounding soundboard recording sourced from a vinyl
bootleg (= tracks 1 - 11 in the tracklisting given at the end of this description).

I have included some bonus tracks, a set of 4 demo tracks (tracks 12 - 15), which the trader I obtained them from stated were probably made in 1983 (recording location unknown), and which are also from a different bootleg vinyl, plus my own master audio capture of the band's live appearance on "The Tube" (UK TV) on 7th March 1986, probably recorded at Channel 4 UK studios in Newcastle, and an interview with DJ Andy Kershaw on the BBC Radio 1 "Saturday Live" programme on 8th March 1986.

No noise reduction or "click and pop" filtering has been used on the tapes of the bootleg vinyl recordings, they have been left exactly as they were recorded originally - in the case of the Seattle tracks, the vinyl surface noise is hardly noticeable anyway, and only a little bit is noticeable at the start of the first of the 1983(?) demo tracks.

Email ThisBlogThis!Share to TwitterShare to FacebookShare to Pinterest
Labels: The Cramps