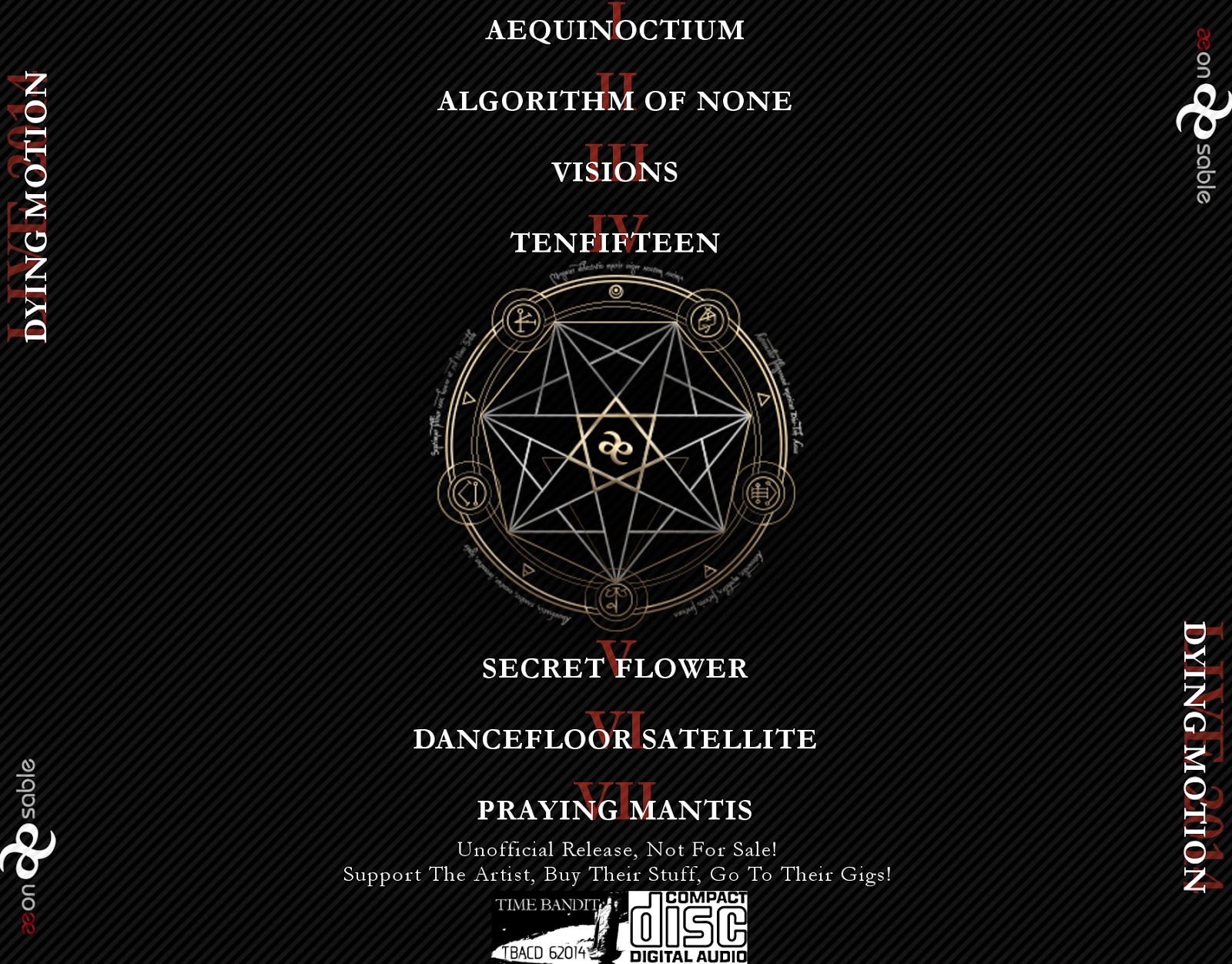 Thanks to NorthernNephilim for sharing his recording here on DCR.

"Do you have a dark side? You will after you listen to Aeon Sable." (DeathRat Fanzine)

“The psychonauts have waited long enough for the dark star to shine…”
(Nino Sable & Din-Tah Aeon, 2010)

Aeon Sable is a gothic rock band with a psychedelic touch, highly influenced by esotericism which was formed in 2010 in Essen by Din-Tah Aeon and Nino Sable. The creativity and dexterity of the two musicians, involved in several projects of the German and Portuguese underground scene since 1997, has allowed them to travel to seductively-surprising territory creating an alluring, dark atmosphere that continues to command the attention of the fans in Europe and beyond. "Do you have a dark side? You will after you listen to Aeon Sable" (DeathRat Fanzine, 2012)

The duo signed to afmusic, unveiled their latest release “Aequinoctium” in September 2013. A 5 track mini album consisting of songs written during the recordings of “Saturn Return” and a surprise gift for their audience, offering them a taste of the versatile blend contained in the new full length album the group is currently working on. The band’s devotion and intense drive for constant growth on every aspect of their art lead Aeon Sable to give rare live performances through which they invite fans to enter their creative realms. Upcoming shows are taking place on Friday 22nd of November at Urban Spree (Berlin) and on Saturday 21st of December at Cage Club (Bottrop) while the psychonauts will be making a special guest appearance on 24th of December in Schwarze Weihnacht event in Moritzbastei, Leipzig. In 2014 Aeon Sable will be emerging from the dark tunnels of imagination once again to hunt the stages of Gotham Sounds Festival (Hilden) in May and Wave Gothic Treffen (Leipzig) in June.

Din-Tah Aeon (guitars/programming/production, instrumentalist-songwriter) and Nino Sable (vocals/lyrics/production, graphics & media designer) started Aeon Sable as a studio project only and delivered a very individual interpretation of gothic rock in their quickly sold out debut album “Per Aspera Ad Astra” released in February 2010. Enraptured by nature and the most obscure sides of the subconscious mind, utmost fascinated by magic and all forms of art, the band continued their atmospheric journey and their second full length album “Saturn Return” was released in the end of 2012. The group, dually inspired by the cold melodies of black metal, ambient and gothic rock, along with the spirit of the country Nino was raised, Portugal, revealed a hunting album cherished by their fans and the media, giving rise to requests for live performances. Aeon Sable felt obliged to appear live on stage and thus, had to invite guest musicians.
The live band consisting of Quoth on the bass, Joh alongside Din-Tah Aeon on the guitars and Nino Sable on vocals, performed in 2013 in Mülheim an der Ruhr, Oberhausen, Essen and Emergency Exit Festival in Dornbirn (Austria). Aeon Sable have appeared in several radio talk shows in Germany while articles and reviews about the band and their albums have been published by numerous gothic and metal magazines including Reflections of Darkness, Gothic Magazine, Legacy, Intravenous Magazine, Dark Spy and Orkus. Produced in Hong Kong in 2012, the official video of the band’s hit single “Dancefloor Satellite” was exclusively streamed on Orkus!TV and appeared in DVD compilations throughout Germany. “Dancefloor Satellite” has been remixed by 17 bands from all over the world and a collection of these remixes alongside the original and “Dying Motion” version can be found in an album available for free download on NoiseTrade.

Their three albums are available on every major download store while “Saturn Return” (Vinyl and CD) and “Aequinoctium” (CD) can be acquired through the band’s Bandcamp site as well as several stores and mail orders in Europe. Din-Tah Aeon and Nino Sable are dedicated in sustaining their inimitable personality by creating and developing a distinctive form of musical art; from composing, recording, mixing and mastering to the artwork and website - everything is made solely by the band. Allow yourself to enter the world of Aeon Sable and journey with the psychonauts in the darkest realms…

Recording made by NorthernNephilim (DIME: TimeBandit )
Do not transcode to lossy formats or remaster!
Not for Sale !!! Sharing is Caring, do not trade the FLAC´s without info file, checksum
If you like the band, please visit their concerts and buy their records.