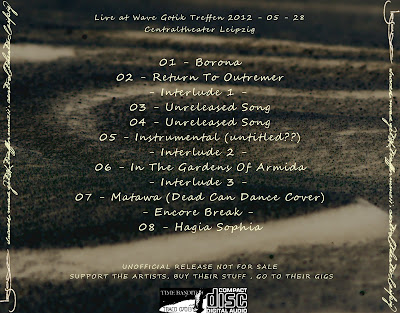 Excellent band in an excellent recording. Huge Thanks to Northern Nephilim for sharing his master here.

Day four from 21st WGT in Leipzig, where i taped in the Centraltheater:


Final day with concerts on Wave Gotik Treffen at the Centraltheater (formerly known as 'Schauspielhaus').
Beautiful venue. If you want to listen to bands with very good sound on WGT this is the place to be.

3 Songs are unreleased / i was not able to find their names.
Excluding Soundcheck file concert fits on a single CD-R.

Irfan is a Bulgarian World Music & Ethereal Wave band. The name of the band is borrowed from the Sufi terminology and can be translated from Persian and Arabic as “gnosis”, “mystic knowledge” or “revelation” (*see Irfan). Irfan’s music is an invitation for a mystical trip in and beyond time, a message, poetically extended in the language of the heart. World reviews are hesitant about the genre categorization of Irfan’s music, determining it as Neoclassical / World Music / Sacred Music / Ethereal Wave / Heavenly voices. Indeed Irfan’s music is a World Fusion and it is strongly influenced by the sacred and folk music traditions of Bulgaria, the Balkans, Persia, Caucasus, the Middle East and North Africa, as well as by the musical and spiritual heritage of Byzantium and Medieval Europe, yet it retains its own original sound. The musicians use traditional (Bulgarian, Balkan, Oriental, Persian, Indian) and medieval European instruments and vocal techniques woven into a delicate electronic dark ambient sound. Similar in style to established bands such as Dead Can Dance, Sarband, and Vas, Irfan uses ethereal and mystic female vocals in addition with strong male vocals and choirs in combination with an assortment of various traditional and medieval string, wind and percussive instruments including the oud, saz, tambura, santoor, kaval, duduk, viola da gamba, darbouka, daf, bodhran, bendir, zarb and riq.
DISCLAIMER:

Email ThisBlogThis!Share to TwitterShare to FacebookShare to Pinterest
Labels: Irfan