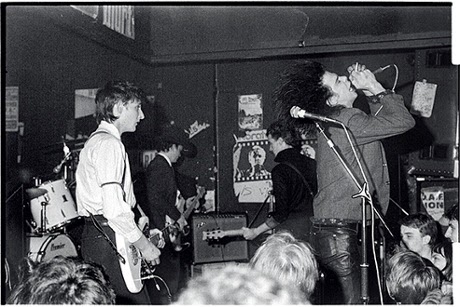 Very good concert from the last tour of Birthday Party. Good sound. Thanks to Stevo for sharing this one.

This was the first cassette I transferred from one of my two new(ly refurbished) cassette decks - purchases excllusively for doing just this sort of thing. I picked up a Nakamichi 480Z, and a NAD 614, and compared this same tape from both decks. For this torrent, I decided to use the NAD, because I thought I heard just a wee bit more definition, and this is a rough-sounding recording, trust me. If the nice people who worked on these decks for me knew what I'd be playing on them, I'm sure they would be more than a little nervous, but they did a fine job, nonetheless.

This show was - quite literally - my introduction to The Birthday Party. My roommate was into them, and said I should check them out; and as was my habit so many times back then, I figured if I was going to be there anyway, I might as well record it, in case it turned out to be something I liked. That backfired on me a few times, but not this time. Unfortunately, the deck I was using at the time wasn't that great, and neither was the live mix in the room - the combination of those two factors made for a less-than-remarkable recording, but I think the energy of the performance is still pretty much intact.

As I also did (too many times for my own good) back then, I made a 1st-generation "master" from the original tape, so this is as pure as anyone will ever get from this source, I'm afraid. In this case, there were two reasons I did this: 1) I had also recorded the opening band, who were friends of mine - called Timbuktu (not that poncy Norwegian hip-hop dude that inspired a flame-war I got into on DIME a while ago about the use of the band name), and I wanted to put both bands on the same cassette, in the order it happened; 2) I thought I could "clean up" the sound a bit by balancing the levels, and I probably applied a little light EQ in the hopes of minimizing some of the distortion. The resulting recording is probably still just about as muddy, so I don't think I gained much; and I hadn't a clue about Azimuth-tuning back then, so hopefully, I didn't do too much damage.

I've traded this out once or twice in the past several years, and one trader expressed complete shock upon learning of its' existence. I suppose since then it's gotten around a bit, but this is direct from the original source; at least the only remaining source, as I've never been aware of another taper that night.

I hadn't a clue what the band sounded like when they took the stage; of course the sound was only a small part of the show. Watching Nick Cave flail himself about, repeatedly thrashing himelf backwards to the floor, teetering on the monitor wedges at the front of the stage, occasionally only held in place by well-intentioned members of the audience who grabbed him by the ankles so he wouldn't fall; all the while barely making eye contact with anything but the ceiling; flanked by the unlikely detached bookends of Tracey Pew, bedecked in a full ten-gallon hat, and Rowland S. Howard, a pale Gothic wraith wrapped in leather bondage gear. It seems likely that while I subconconsciously may have processed the sonic impact of the show at the time, I don't think it really registered until I got home, and listened back to the cassette; my eyes were so transfixed to the spectacle on stage.

As a complete aside, there was amusing bit of drama taking place near where I stood in the audience. My "spot" was in the left balcony of the venue, and I could observe the comings and goings of other people below me on the first level. About the same time the band were taking the stage, a couple of gentlemen entered the club, one wearing a bright yellow three-piece suit with a matching fedora-style hat, and his companion in a similar pink outfit. (I'm not making this up, really!) I could hear their conversations, which suggested they weren't there for the band, but were looking for young single women - after all, I guess, this was a downtown nightclub. The man in the pink suit ventured to the right side of the club, the man in the yellow suit stayed right below me, staring dumbstruck at the stage, as The Birthday Party started their set. By the end of the second song, he hadn't moved from his spot, and the look on his face was practically an expression of abject horror, as his hands hung limp at his side, in fact pouring half of his drink on his shoes. The man in the pink suit came back after a few minutes and suggested there were a couple of available girls at the other end of the bar; he couldn't get his friend in the yellow suit to budge, however. Right after the second song, you can hear the man in the yellow suit, as his frightened voice exclaims: "It's the end of the world - it's the end of the fuckin' world!" His friend in the pink suit glanced at the stage and decided maybe they should just both leave, come to think of it.

Okay, it is a silly story but I've had that visual memory in my head for twenty-five years now, so now you can share in the fun.

Email ThisBlogThis!Share to TwitterShare to FacebookShare to Pinterest
Labels: The Birthday Party