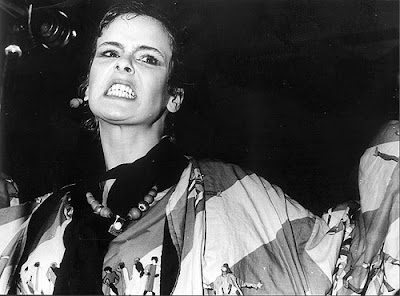 Now this is a rare treat, a Skeletal Family recording with Katrina on vocals with some unreleased songs. Huge Thanks to Egg:Crisis for this one.

cassette(Audience,unknown gen,BASF LH-EI 90,from a trade in 1990-a copy of a tape from a record fair) > wav > Soundforge(normalise uneven L&R channels) > CDWave(split on sector boundaries) > flac(6)

Originally taped on a c90 with tape flip in the middle of the final song, then copied to a c60 with tape flip between tracks 8 & 9, then copied to a c90 with tape flip before the final song. :/
From track 9 onwards (side B of the c60 it was copied from) the left channel was poor so I doubled up the right channel for the remaining songs (and consequently the flacs for those last 5 tracks are smaller). During "The Wizard" the sound went quiet for a few seconds in the left channel so a 10sec part of the right channel had to be copied over to cover that part.

Taped by the same guy who taped the March Violets Warehouse'84 gig. Unfortunately unlike that one he couldn't find anyone to hold the tape recorder for him so he takes the tape recorder to the toilet during "Lost And Found". Just like cats like to mark their territory a few of this guys recordings seem to be marked in this way!

She Cries Alone has a very brief Batman ending.

The Katrina lineup of the band only released 2 singles so some of these songs may be new to some. (Tracks 4,6,7,11 are only available as Janice Long session tracks, Tracks 5,12 unreleased in any form, I think, unless I've overlooked something.)

yjzlxmtUgKh0cs
Posted by circle at 09:10