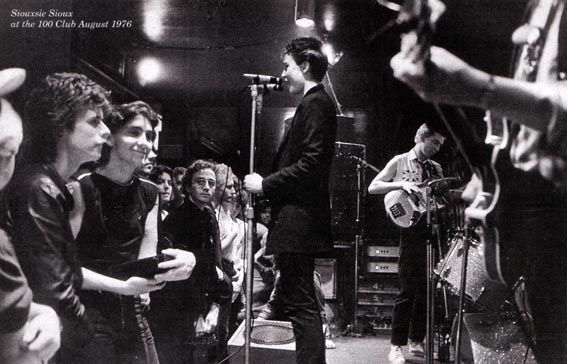 A Piece of rock history, Siouxsie and the Banshees first concert. Thanks to the original uploader.

This is a pretty historic recording - Siouxsie and the Banshees first concert. A shame the sound quality is so poor. I got the cassette in 1990 as an upgrade on the version I got in a trade 5 years earlier which was much worse, and it's a little more complete too. I'm told some versions are missing the ending, but this version has it. It's a pretty bad recording - one for obsessed fans only! It sounds like it was recorded with a really bad mic which is partly to blame for the quality. Many of the portable tape recorders available in 1976 were pretty low-tech compared with just a few years later and it's most likely recorded on the tape recorders built-in mic.
I dehissed it with Adobe Audition because my preferred dehisser (Groove Mechanic) did something weird with the first 7 minutes of the recording. Then it just needed a small amount of equalisation to sharpen up the top end and boost the bass a little, although it still sounds a little tinny but I couldn't increase the bass any more without making it sound worse so I left it as it is without trying to equalise further. On my tape someone turns up the recording level at 7:16 into the recording so I had to make different eq settings for that part, although it's not too noticeable.
It's 31 years since it was recorded, and if the taper used a cheap make of tape as so many people did back then, then the mastertape will probably have degraded into a pretty poor state. We can but hope that within the first few years a few copies were made onto a TDK or something like that. (My oldest cheap-make cassettes from 1979 have degraded very badly whereas my oldest good quality make (TDK) still holds up remarkably well).

Here's a brief summary of the story behind this gig for anyone who might not know it:
Siouxsie, Steve Severin, and others (including Billy Idol) were huge fans of the Sex Pistols and followed them around to gigs. The music press named then the Bromley Contingent. At the Sex Pistols 'Screen On The Green' gig on 1976.08.29 Siouxsie, Severin and Billy asked Malcolm McLaren (Sex Pistols manager) if they could appear at the upcoming 100 Club Punk Festival, and he agreed.

First they had to think of a name for their band. Severin took insiration from the horror movie 'Cry Of The Banshee' and the name Susie and the Banshees was chosen. (The Siouxsie spelling came later).

Next they had to decide what each of them would to in the band. Severin had never touched any kind of guitar in his life and Sioux had never sung publically. Idol taught Severin to play bass, but then 2 days before the gig Idol decided he couldn't take part as he believed it would harm the reputation of the group he'd recently joined (Chelsea). As a replacement he suggested Marco Pirroni who'd just left Chelsea, and since they still had no drummer McLaren suggested Sid Vicious. Sid agreed, but only if he didn't have to play cymbals or sing.

The day before the gig they had a 2 hour rehearsal at The Clash's rehearsal room in Camden. Much of the rehearsal time was spent discussing what they would do, rather than actual rehearsing. They decided on a continuous wall of noise over which Siouxsie would sing extracts of what she considered the most ridiculous songs ever written while Pirroni would play riffs from cliched rock standards.

Then the gig itself. The plan was they'd keep playing until the audience got bored and they were booed (or thrown) off stage! When they started the audience was aghast, many turning away to get another drink from the bar. Johnny Rotten danced at the front. After 25 minutes the band got bored before the audience did and just stopped, and returned to the audience.
Howard Thompson (Island Records A&R man) was there and said "God it was awful!". Nils Stevenson & Kenny Morris were impressed though, and Nils offered to be their manager and Kenny offered to play drums, and the rest, as they say, is history.

Tracklist: (all as one track because they only performed one song)