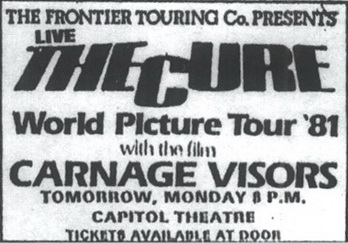 Excellent PreFM recording of the Picture Tour for the Faith album with the extra 4 songs from FM.. This version was recently shared on Dime, minus the song Faith, which is included in this link, and banned because of  suspicion of lossy ancestry.
The spectrum posted at Dime that showed cut off leading to claims of lossy lineage is the same as other versions of FM recordings from the 80’s, it’s also the same as the FM recording from the 2005 6 song broadcast, which means that the original master is the cause of the lossy looming spectrum, it has nothing to do with the use of any type of lossy process when editing it,

Huge Thanks to Brent Graham for sending me the link to share here.

Today 14th April 2021 is 40 years since the release of The Cure's 1981 Faith album, I think the 40th anniversary would be a good time to share one of the rarities I have in my live Cure collection, the best sound quality recording I have of the tour from 1/4 inch reel to reel tape, I know that no other person has this, so this is a first for anyone to hear this in such great quality! No doubt it's the best sound quality anyone will have heard from the Picture Tour for the Faith album, there were better performances / shows, but this is undoubtedly the best sound quality of anything out there from
1981, so for the 40th anniversary of the albums release I'd like to put it out there and share it with everybody...

To make the show as complete as possible I have patched in 4 songs from a master cassette tape recording from Canadian radio in the 80's (In Your House, Primary, Jumping Someone Else's Train and Another Journey by Train), those 4 songs were not included in the Australian broadcast, the quality of those 4 songs is OK but not great, but the best that can be found.

The 1/4 inch tape digitization did not have Robert's comment before Faith "This is the last song it's called Faith" or the comment after Faith "Thank you good night", so I have patched in those 2 comments by taking them from the Charlotte Sometimes 12" vinyl single (the live version of Faith on the Charlotte Sometimes 12" vinyl single B-Side is from this show). The reason I sourced the comments from the 12" vinyl and not from the extras CD of the Faith album remaster is because the 12" vinyl single has a longer amount of crowd noise before Faith than the remaster bonus CD, which allowed me to seamlessly join up the crowd in between A Forest and Faith without having a cut in the crowd between the 2 songs.

I needed to do a bunch of fixing/cleaning up ("mastering") on the 1/4 inch tape digitization, the left channel was noticeably less bright sounding and lower volume than the right channel, I'm unsure if it was damaged tape edge, incorrect azimuth or tape head alignment during digitization, or maybe for some strange reason was EQ'd down, but after some time and effort I have got it to closely match the right channel and sound as it should (EQ'd left channel separately to match right, EQ'd both channels together). I also did a bunch of work on the 4 songs from Canadian radio broadcast (swapped left & right channels, EQ'd, lowered volume, and corrected speed-tempo & pitch -2.6% / -2.9% (about 45-50 cents as the cassette tape was playing quite fast).
I also EQ'd and lowered volume of the comments before and after Faith taken from the Charlotte Sometimes 12" vinyl single B-side. Overall no real problems anymore, the 1/4 tape has a bit of hiss sometimes noticeable left channel, but nothing bad, it is related to the very slight tape damage or digitizing issues I mentioned above. The main problem with the 4 songs from radio cassette tape was that the hit-hat was almost ear piercing, so I brought 12.k down around -13dB which has improved it greatly, but will never be able to be fixed properly.
I think it should sound good with standard type bass/treble controls around about bass 40% / treble 60% / subwoofer pretty low !?!?

This is all of the songs that exist of this show from this 1/4 inch tape source, after the multitrack tapes were mixed and edited down for Australian & Canadian 1981 radio broadcasts they were probably re-used / recorded over, but I think likely were given to Robert Smith, as I do know that Robert has multitracks of the show because he told me himself...
It would be nice to hear a full show re-mix from Robert's multitracks some day!, some of the mixing could be improved!

Some notes...
Faith from this show was officially released as the B-Side on the Charlotte Sometimes 12" vinyl single in October 1981.
Robert introduces Charlotte Sometimes as "this is a song we've only ever done once live", nobody would have known Charlotte Sometimes at the time as the single/song was not released until 2 months after the show.
Robert plays 6 string bass in Primary and Faith, and sings while playing synthesizers in The Holy Hour,
The Funeral Party, All Cats Are Grey, and Charlotte Sometimes, Simon also plays synth during the intro to A Forest and plays bass synth pedals in Faith, most noticeable the last minute or so of the song.
Faith is an extended 10 minute version with ad lib lyrics and 6-string bass.
The last song Forever is a "jam" with ad lib lyrics based on the instrumental track Three from the Seventeen Seconds album, it was played to end most shows on the tour (similar to All Mine in 1982), and played here and there throughout
The Cure's history to end shows, but this Picture Tour for the Faith album was the last year it was played to end almost every show of the tour.

In addition to the 1981 radio broadcasts of which only mostly badly degenerated sounding cassette tape copies exist, a few songs were broadcast on Australian radio in 1995, then 6 songs broadcast on Australian radio in 2007, however the quality of the actual broadcast was poor, the sound was very thin and brittle, so this is an all round huge upgrade.
The 80's Canadian broadcast did not include All Cats Are Grey, and when it was played during the Australian 80's broadcast a ladies voice (I presume the DJ) spoke over the top of the song 1 minute before the end saying "testing testing 1 2 3 testing", so this is the first time All Cats Are Grey has been available witout the ladies voice speaking over the song.

*All songs Australian source digitized from 1/4 inch reel to reel tape, except 02 - In Your House, 05 - Primary,
12 - Jumping Someone Else's Train and 13 - Another Journey by Train from master cassette tape recording of Canadian radio broadcast in the 80's.

Based on setlists of the time it's most probable the whole concert was the following setlist below, they had recently started playing the yet to be released Charlotte Sometimes B-side Splintered In Her Head in between Grinding Halt and A Forest, but in the reel to reel recording you can actually hear the last second of Grinding Halt before A Forest starts, so it's unlikely Splintered In Her Head was played.
The show is most probably complete except for the following 7 songs : The Drowning Man, 10.15 Saturday Night, Accuracy, At Night, Fire In Cairo, Play For Today, Grinding Halt.

THANKS TO ROBERT, SIMON and LOL!!! (FAITH 40th ANNIVERSARY!).