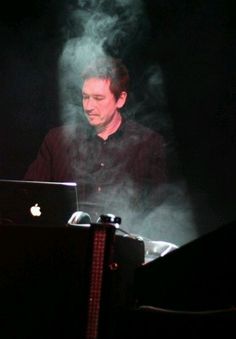 Very good audiece recording. Thanks to Ryan for sharing it on Dime.

Notes: Flew in from Detroit to see this show the day of. Pretty cool little club. It was very very hot in there. The show also started very late (9:30) and recoil did not go on until 10:45. Alan Wilder came out and introduced Joe Richardson, which if you do not know, is the blues singer that does most of the vocals on Subhuman which is absolutely incredible. Joe did a whole acoustic set with how the Subhuman album originally sounded (or what joe recorded) and he did one song from one of his albums. During the Recoil set, Joe Richardson came out and sang some vocals along with Nicole Blackman doing a few songs. Douglas McCarthy from Nitzer Ebb was also supposed to be in attendance this night to presumably to sing on "Faith Healer". But because of the volcanic ashes near the UK he could not make it. The recording came out very good. The sound was really good and with only about 500 people in attendance for the show, as it was a very small club, it was a rather quiet show. Enjoy the recording!

Email ThisBlogThis!Share to TwitterShare to FacebookShare to Pinterest
Labels: Recoil