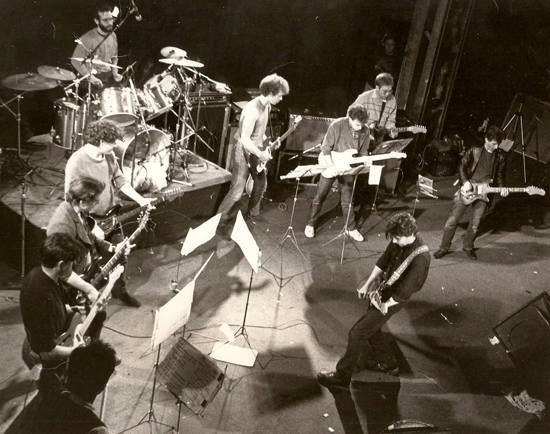 Excellent FM broadcast. Thanks to the original uploader on Dime.

Thurston and Lee (and Ned Sublette) performed with Glenn Branca's ensemble. According to Ned, this was the fourth installment of a movable festival called "New Music America" (which had begun at The Kitchen in New York City in 1979 under the title "New Music New York"). The Chicago version was officially called "Mayor Byrne's New Music America" (after Mayor Jane Byrne).
The piece was written for 10 soprano guitars -- guitars strung only with high E-strings. Broadcast by WFMT-FM.

"Indeterminate Activity of Resultant Masses" was recorded in 1981, and officially released in 2007.  Wikipedia states it was recorded in 1982, but I am fairly certain it is from 1981 as John Cage gave a scathing review of it, which is included on the same release under the title "So That Each Person is in Charge of Himself."

From the same festival, there is a cassette release, Chicago '82: A Dip in the Lake, but it contains "Excerpt from Symphony No. 2: The Peak of the Sacred" which is a different piece. https://www.discogs.com/Various-Chicago-82-A-Dip-in-the-Lake/release/494900

I'm certain that this is a live version and not officially released.