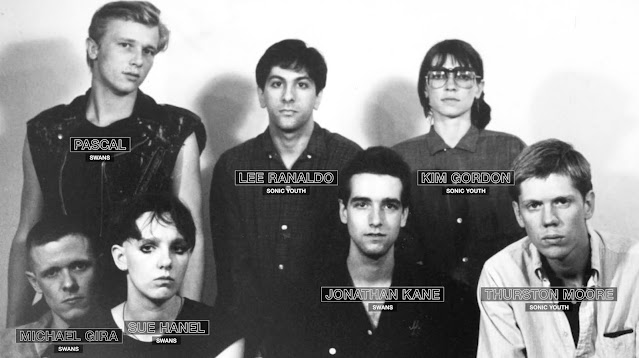 Recorded during the "Savage Blunder" tour that took place in November/December 1982. Good sound and a espectacular document of both band really at the begining of their careers. Thanks to the original  uploader on Dime.

I have no idea of the generation of these recordings. I received them in trade, from two different folks, so it's possible both generations are different. They are included here because they were recorded together.


Thanks to Chris Lawrence's superb SY ConChron for the following info:
Here's a quote from the guy who taped this show (courtesy of Jim):

"Anyways, the Sonic Youth/Swans thang: What he's talking about is the tape I made of both bands at a cable TV studio. They were on tour together for the 1st 12" ep's, with a gig that night in Ann Arbor. They came by the studio in the afternoon (I knew one of the camera guys) to record short sets (not together!). They sound like instumentals because there was no p.a., but there were monitors on the stage, so vocals are there - buried. I just sat in the middle of the studio with a boom box...The studio was Group W Cable in Dearborn for the record. They also shot sets by DOA and MDK, but I heard from the camera guy that all tapes were destroyed/erased. There are tapes around from the next year of Misfits, Negative Approach, and some other local punk on a show they did "Why Be Something You're Not."
http://www.sonicyouth.com/mustang/cc/dearborn82.html


Originally seeded at DAD on Dec15, 2005 by Brett Robinson