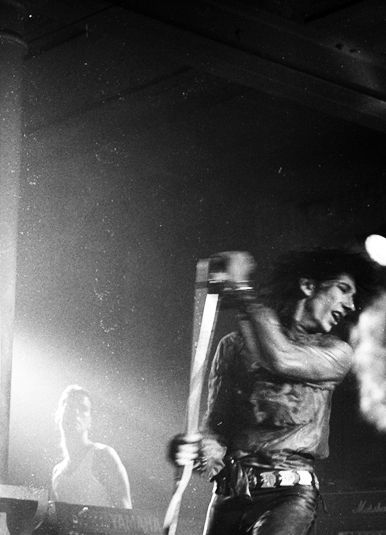 Thanks to the orignal uploader.

Original notes :
This is the 237th upload of my concerts collection recorded in Lyon (France) between 1982-1990.
THE LORDS OF THE NEW CHURCH were recorded for ZAP FM at "Le Summum" de Grenoble (100 km east Lyon).
Usual mix of soundboard outputs and ambiance mikes mixed lived on a 4 tracks desk with headphones, onto a cassette tape recorder SONY TCD5M ...
This concert was recorded one day before the one recorded at Le Truc[k] in Lyon on November 6.
My apologies for the 4 first tracks which were mixed so strangely....
With a special (bad) mention for the track 4, i suppose that the band soundman suddenly awaked and began to touch all the faders ...
After that, the sound stayed normal in the mix ... sometimes, Stiv Bators's voice was weak in the final mix.
But a concert full of energy and it was the Stiv Bator's birthday that night ....

Email ThisBlogThis!Share to TwitterShare to FacebookShare to Pinterest
Labels: The Lords of the New Church