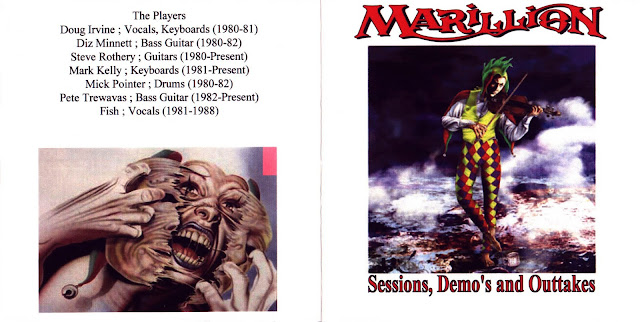 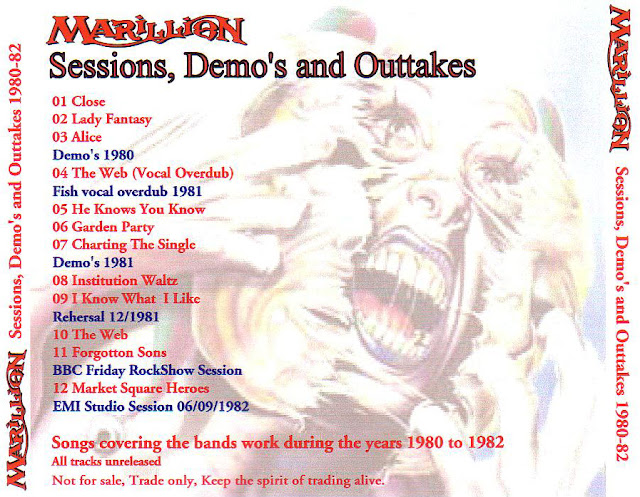 Thanks to appick for sending me this compilation to share here, and to the original uploader that assembled it.

Found various Marillion demo tapes lying around and thought i would transfer them to cd.
The first 3 tracks are from a session with the original vocalist Doug Irvine. Sound quality
was quite poor due to the age of the tape and with quite a lot of tape hiss.
Track 4 was the first time Fish sang on a recording by the band. Legend has it that he saw an
advert for a vocalist which he answered and they sent him an instrumental version of The Web.
Onto this tape he overdubbed the lyrics he had just written and the sent it back to the band.
The rest is history (as they say)
Tracks 5-7 are demos by the band and are all different versions of the songs.
Tracks 8-9 are rehersal songs with I Know What I Like developing into an argument within the band.
Tracks 10-11 are BBC Friday Rock Show sessions, another track was broadcasted (3 Boats Down From The Candy)
but sound quality was very poor so i left it off this collection.
Track 12 was an EMI studio session and i have checked with the versions officially released on the Script
double album and this isn't there so i have included it here (this version has a different intro).
I was hoping to include Grendel (EMI studio session) but it sounds very similar to the one on the
Script album so i left it off.
All tracks have been cleaned using the Steinberg Clean Vers.3 computer programme and it has improved the quality no end.
Some tape hiss is still present but no where near as bad as before i cleaned them. Hopefully it won't spoil
your enjoyment as some of the tracks are quite historical.
as always don't encode to mp3 and do not sell.

Marillionsessionsoutakes8082
Posted by circle at 13:40

Email ThisBlogThis!Share to TwitterShare to FacebookShare to Pinterest
Labels: Marillion