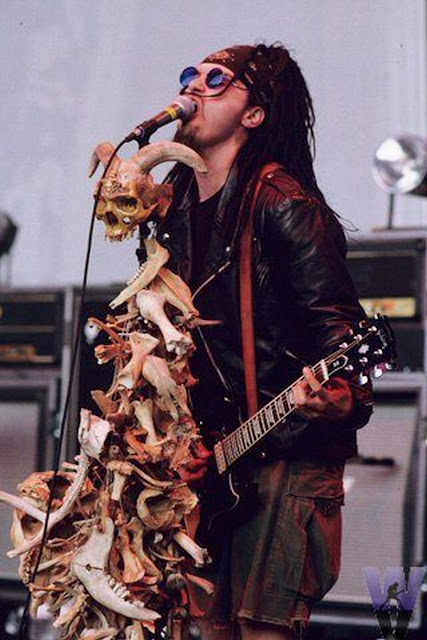 One of the first concerts from Ministry I ever posted on the blog, Now in a lossless version courtesy of ledl_33, our THANK YOU to him.


Audioarchivist notes:
Recording the show... I had seen Ministry a few months earlier at Lollapalooza and to me they were the best thing on the stage that day, so I was excited to record them again! I tried to stand as centrally and as close up in front of the soundboard as I could, to capture as much of a full frontal assault of a wall of sound and music and white noise and distortion and horrible room reverberations as possible! Haha!

Fast forward 25 years or so, and I made a reasonably decent digital transfer of the master cassette that was at the show with me so long ago. The 110 minute tape is thinner than regular tape stock that a 90 minute tape would use, to fit the extra footage onto the same space inside the cassette shell. I find that this can cause some minor dropouts and fluctuations in the recording. In other words, I am not that impressed with this brand and length of tape, for that thin tape. It did, however, capture some extremes of high frequencies for an audience bootleg and the limitations of my rig at the time! So, in a way, it is kind of impressive!

After my initial cleanup and sound processing with Audition and Wavelab and some plugins that I cannot remember, I produced a set of files that sounded good, but had a few distracting moments throughout of people screaming and talking a bit too close to the microphone as well as some loud clapping and other interfering noises. I have used iZotope RX Advanced 2 to minimize clapping of nearby audience before with the click remover, but I began to experiment with spectral editing to manually select and minimize audience screams and talking and whistles and the like without damaging any musical content. After some successful trials, I went back to the original master transfer files to minimize the loud clapping and manually remove most of the annoying talkers, screamers, whistlers, that guy barfing in the corner at one point, etc... This took some time - a lot of time! I must have spent a couple of weeks solid working on this show, 10 or 20 seconds at a time, over and over, to identify and isolate every unwanted sound not made by the band and remove it. Crazy hard work!!! Like photoshop for sound! Then I re-processed this "cleaned" sub-master file again with my effects chain that I had saved from my first attempt, to produce a second set of files that I'm sharing now.

Stuff happens, time passes. I did all this work, and didn't get to posting it, and put it aside. More stuff happened. Long story. Now finding how almost ready this was, and decided to push it over the finish line! Even that took some time...

I've never known the P.N.E. Forum building to have decent sound for concerts - I've referred to it as an echo chamber from hell, and this show was no exception, really. It wasn't the worst I've heard there, and my tape captured a good representation of what I remember hearing at the show. I hope you enjoy it...