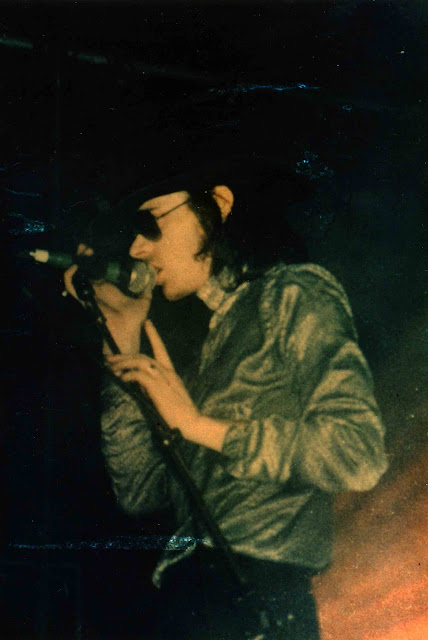 The sound on this one is not great, I think that the taper was not on the same room as the band... Or maybe the tape is a couple generations too far... Or both.

Anyway, the most interesting thing is the fact that Eldritch sings Stop Dragging My Heart Around acapella before a couple of the songs, like he actually came to do on the 1992 tour seven years later, but here it seems that the band is experimenting it as a possible intro to one of the songs.

Then there's a long version of Starway to Heaven, wich is a curiosity but does not really works that well. It's an alternative to the more common short version that populates various bootlegs.

There's also a short but much more groovy instrumental version of Ghostrider, wich gives a hint that the song never really got as far as it could in the actual live set, not actually becoming the beast that the band wanted to close their concerts.

This recording was on the first side of the tape and it lasts 45 minutes. I have some conflicting info that says that this is the lenght of the circulating recording but also that it ends with Louie Louie, wich is not present in this tape, that ends with Burn.

Side B of the tape was labeled, Rare Outtakes, but in fact was a mix of Demos and live versions, I included the three more interesting and less common songs as extras.

First it's a version of Knocking on Heaven's Door with a real drummer and female vocals,  from the encore with the Skeletal Family in Hamburg 1985, the last time Andrew and Wayne shared a stage.

Thanks again to sleepchamber for sending me his tapes to rip and share here.

Do Not Sell!
Do not convert to lossy formats unless personal use.
Support the artists by buying official products.
Enjoy.


sleepchambertape12
Posted by circle at 11:39

Email ThisBlogThis!Share to TwitterShare to FacebookShare to Pinterest
Labels: The Sisters of Mercy 1985