Excellent concert with the band at it's best. Excellent sound. Thanks to Eggi1 for sharing his recording. 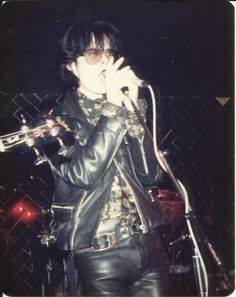 An early concert with nice sound. Really like this "Watch" live version. In Flac.

Email ThisBlogThis!Share to TwitterShare to FacebookShare to Pinterest
Labels: The Sisters of Mercy 1982

A new mix tape, a little bit more quiet than usual. The awesome photos from the post are from Ulrich Herrmann, who was kind enough to let me use them here. He has a gallery, full of great photos and collages, you should check it out.

The Sisters of Mercy - Kill The Lights (Bootleg)

This LP is the sixth Palazzograssi production, catalogue number PG 06. Coverart is of Eldritch in white fencing clothing on a white background. This release was limited to approximately 1500 copies, with 5 copies released as a box set with t-shirt. Thanks to Jember for sharing this one, ripped from his Vinyl copy.


Very Good FM broadcast. An unprobable collaboration, but it results very well in the end.

Noise mongers ATR at their absolute best in this excellent sounding FM broadcast. They are reforming for some concerts this year and a new record also. Be sure not to miss them, if there is a time their message makes sense is now!

It is with great sadness that we received the news of Type O Negative front man Peter Steele's death of what appears to be heart failure. He was only 48 years old.

"News of Steele’s death was initially received with disbelief as Steele pulled a hoax in 2005, posting his picture and the years “1962-2005″ on the group’s official website. Soon after, Steele all but disappeared as he battled drug problems and a prison stint. But today as members of Steele’s circle began to confirm his passing, the Type O Negative message boards opened this morning with the message, “Please play nice and expect statements from the band and family later today. Thank you for your understanding and support.”

Type O Negative became one of the most unlikely bands to break into the mainstream in the 1990s with their third album Bloody Kisses, which became the first album released by Roadrunner Records to go platinum. The album boasted rock radio hits “Christian Woman,” a cover of Seals & Crofts’ “Summer Breeze” and “Black No. 1.” The singer recorded seven albums with Type O Negative, the most recent being 2007’s Dead Again, which entered the Billboard 200 at Number 27, the band’s best debut." in Rolling Stone Online

He will be greatly missed.

Here's something to remember Peter.


A short but briliant set, don't really know why the almost acoustic title since there's lots of electric guitars with the usual distortion... Excellent sound in Flac. From the JLW DAT tape archive. Thanks to the original uploader.

Email ThisBlogThis!Share to TwitterShare to FacebookShare to Pinterest
Labels: The Jesus and Mary Chain


Very Good sound, probably from a FM broadcast. Another tape rip that JEmber decided to share with us. This is All About Eve in top form and already a mature live act in front of a very enthusiastic audience. By these times, Tim Bricheno had already left to join The Sisters of Mercy.

Nice sound. Another share by JEmber. Ripped from is tape collection. Our Thanks to him. It has the exactly same setlist of the concert of Nottingham three days earlier and the bootleg tape had the two concerts together. Both concerts were from the short UK tour they played as support to The Mission (which is why the sets are so short). The Mission had just started playing larger halls instead of clubs as a result of the success of their first album and "Wasteland" and "Severina" hit singles.


The Death Cult on the verge of turning inti The Cult. The setlist is almost completely made of songs that would be recorded for the Dreamtime album and it's singles B-Sides. Nice sound. thanks to the original uploader.

Nac/Hut Report, is a polish-italian band. They've released some material for the american label RCP Tapes and an EP in 2009. They've just finished their first LP, and decided to not release it onlabel but to spread it for free through the web.

They contacted the Room to help spreading and after hearing the album I was absolutely sure I wanted them in the blog. Their sound has a dreamlike ambient (sometimes nightmarish...) that I love in bands like My Bloody Valentine, Lycia or Death in Vegas and, at the same time, has nothing in commom with those bands, being highly original and intense, with amazing guitar playing. "Dead Steps", "Sand", "Not Completely Legal" and "Butterflies on Bodies" are for me, the standout songs, but the entire album has a coherence that it's difficult to find nowadays.

I liked the album so much that I grabbed the opportunity to make them a small interview, that I think you should read after hearing the album. Also, if you like their music, go to their MySpace page and drop them a message and be sure to check the promo video of "Butterflies on Bodies".

What motivated you to start the band?

BR: We've met almost 3 years ago in Krakow and then started our relationship. After around 10 months we started to live together and Li/ese/Li had idea of a musical project that seemed to me very interesting, so we decided to make music and then it developed more and more till we begin to record the first tracks and work on an album.
Li/ese/Li: The main motivation was to share an artistic experience andmusic was perfect for this.

For a relatively new band, your sound is quite mature, do you had any other bands in the past?

Li/ese/Li: I have been in a band for many years, and here i started dealing with minimal composition and with some ideas of "experimental" guitar, something similar to Glenn Branca or Sonic Youth. Later i used these elements even in Nac/hut Report project.
BR: I wasn't in any band before, I always liked music but I've never thought about it as a medium of expression - before I met Li/ese/Li I worked only with visual art, then he had this musical project in which in the begining my part was only vocal, but very soon step by step I started to be an active part in the creation.

Can you reveal a little about your songwriting approach?

Li/ese/Li: Normaly the songs start from noise collages and "concrete" sounds.Then slowly we start adding rythmical and melodical parts.
BR: Sometimes it's difficult to find right melody for all these noises. It happens that we have some noises, then we get melody and the process of composing starts again from this moment.
Li/ese/Li: We use a lot o pop tunes in our songs, but none of them has been created especially for one song, we just create them out of every context, we record them and then we put them in a song, piece by piece, untill we don't find something that fits to noises, guitars and all the rest. Often we deconstruct the voice parts. We put one on another tunes that were not meant to be mixed together.
BR: It's you know, like crazy painting, like if you would take a
little of action painting, ideas of Dada and trow it all on some portrait made by Andy Warhol. There's a lot of "deconstructive" spirit in our way of working, like producing a collage of "ready made" things.
Li/ese/Li: We don't like our songs enough to treat them too good.

I find your music quite visual, do you think of images/films when composing?

BR: Personally, it happened to me with "Butterflies on Bodies", when I was working on this song, I was thinking about Velvet Underground's "Venus in furs" and some sado-maso images, so there was a little of visual inspiration in this track, but mostly when we work on sound we think more about the atmosphere of sound itself.

By the way, very good video on your MySpace page, did you directed it yourselves?

BR: Thanks! Yes, we did it by ourself. We like to create a visual context to our music. Actually I'm working on a short promotional movie, something quite weird.

Why the decision of putting the record as a free download opposed to the regular way of releasing a CD/Tape/Record? Does this, in any way, reflect your opinion on the actual state of the music business?

Li/ese/Li: Yes. in this period you can find a lot of self-released music that sounds much better than the music published by main indie labels. In some way we wanted to be part of these beautiful music "scene" produced and released outside every kind of market, to us this stuff is like some kind of Art-brut or Outsider Art for the internet era. While most of indie labels are producing something more stereotyped and conservative. We are more interested in the deviant
cultural products than in the music market.

What's your opinion about the internet's role in helping/hurting
the promotion of new bands?

Li/ese/Li: In my opinion it helps a lot, you can manage a lot of things by yourself and you're not doomed only to follow the labels.
BR: Blogs are great, they let you reach listeners all around the world. Of course it takes a lot of time and work to get in contact with the people that could be potencially inetrested in your music, but it's also wonderfull to have direct contact with them.

Do you do concerts? If not do you plan on doing them in the near
future? (I would love to hear these songs live)

BR: We're planning to do some concerts in next months, but we still need to search for the places where we could play. Till now we've had some gig, and we opened a concert of Carla Bozzulich's Evangelista. The live songs are different because we don't want to give them any structure and so they could sound very fragmented and chaotical, but for us is very interesting and we would like to play much more in the future.

http://www.mediafire.com/?fmnj0jjlzz4
Posted by circle at 14:46 No comments:


Very good early concert with good sound, the first share from JEmber, who riped it from is old tape, and mixed it to get the better sound. Our thanks to him.

Email ThisBlogThis!Share to TwitterShare to FacebookShare to Pinterest
Labels: The Sisters of Mercy 1983

Thanks to sisteruli for sharing this one in WAV.


Dead Links
Posted by circle at 14:02 No comments:

Email ThisBlogThis!Share to TwitterShare to FacebookShare to Pinterest
Labels: ohGr

Email ThisBlogThis!Share to TwitterShare to FacebookShare to Pinterest
Labels: The Sisters of Mercy 1984


Now that Trent has ended NIN, it's a good time to discover the origins of the band, taking a trip back to the time where they were starting to get noticed by their chaotic full on live performances. In this early encarnation of the live band you can find Richard Patrick, later to leave the band and form Filter. From the collection of sisteruli.


Dead Links
Posted by circle at 15:14 No comments:

Excellent sound. Thanks to sisteruli for sharing this one.


Good concert. "Temple of Love" is cut in the beginning, probably due to tape change.