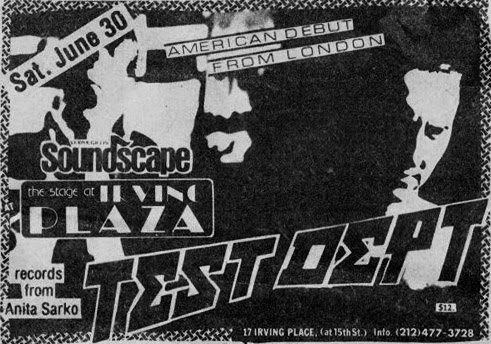 I have edited start/finishes, normalised (-1db) and balanced (Amp statistics - average RMS power) each Wav in Adobe Audition, no other process, straight conversion.

THIS IS NOT THE OFFICIALLY RELEASED THE RITZ 1984 RECORDING (Different Venue & Date!)

Setlist (List on tape inlay from setlist sheet at the gig):

I seem to remember walking around NYC for weeks on end....anyway...I stood centrally with no one around me and it made an excellent recording (IMHO) for the period & equipment I used.

An excellent performance from TD, full of massed energy & power, add some bass & turn the volume up!

"The band toured America for the first time in July 1984, travelling east coast to west coast and back again. At Irving Plaza in New York City on June 30, as at The Ritz on July 19, the stage was cluttered with relics. Spring coils, butane jugs, overturned barrels, waste cans, a car door, iron sheets, long shiny aluminum tubes, industrial cable reels, canvas screens, tape machines, and one huge rusted fuel bin, smoke rising from it as it was pounded upon by angry mallets.
A thick black air compressor read, "WARNING - this machine is automatically controlled. It may start at any time." A perfect description of Test Department.
No one understood how the Irving Plaza show could have been squeezed into the Kool Jazz Festival, in a classic piece of juxtaposition; the opening blues band, feeling the heat, checked out early. During soundchecks, the small room rang with grinding and grating. It was revealed that all instruments were found on hunts through Cropsey Street in Brooklyn, though one dark barrel read, "57 St. Marks." And down in Soho, an unknown fan scrawled upon a lunch wagon, "Test Dept: The Fear Tool - Use It." Everything was ready to go. The sound was perfect, better than at The Ritz, where a microphone or two failed to function.
Diminutive of stature, the men of Test Department erupt in unison choruses of controlled destruction. Reserved offstage, they explode, once on, in piercing anger and release.
The lights dimmed. I was swept up in gorgeous colors of torment. For too-brief periods I detach from myself and become sublime in the waves of violence.
Then, the feeling of my own futility, for I cannot join their ravishing ecstasy. They too felt somewhat isolated in their glorious frenzy, admitting later that they wished the audience could have joined in, in true ritual fashion. I explained to Angus (the man with the trumpet and the close-cropped blonde hair) that all I wanted to do was to bask forever in that feeling of danger, and even to rush the stage to explode in a brilliant fireball. Rejoined Angus, "You should have."
No insult was ever intended in that invitation."  http://www.myspace.com/testdepartment/blog


If sharing please use TB AUD MASTER (2013) on description & If you are going to re-seed this somewhere please keep all this orig info.