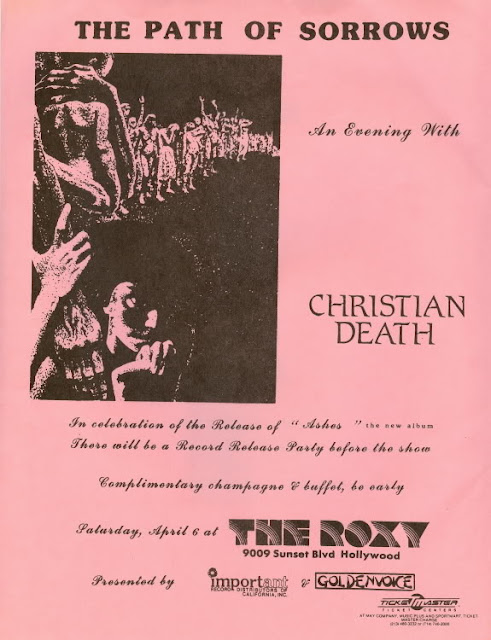 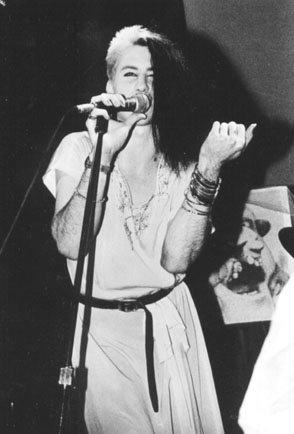 Another rarity shared by Superblasted. A Huge Thank You to him for this week of Christian Death Delights.

"The Path Of Sorrows" performance.
(not to be confused with The Path of Sorrows album released in 1993)

This one is the only know 1985 recorded performance with still Rozz on vocals!

I tracked down this show for so many years, and so far it's the better source i've got.
The sound is a bit muffy and loud but overall good. I tried to level up the high frequencies but the result wasn't satisfying, and too saturated.
So this is the direct transfert from what i got. It got some little pops on a couple of tracks however.
If someone feels like improving the sound of this historical performance, or even better, has a low gen source, please process and share!!

Christian Death performed a series of gigs entitled "The Path Of Sorrows" in march/april 1985 in America to promote "Ashes" album.
The Los Angeles gig at Roxy Theatre on 6 April 1985 is a multi-media extravaganza featured films, a banquet, and a program. Kristina Fuller coordinated and supervised the visuals, film sections and Rozz's four costume changes.

In late April 1985, Rozz officialy left Christian Death after a phonecall to Gitane Demone, leaving Valor to take the rest of the band to Italy as part of the European tour.
The Rest of the story is well known, Skippy hijacked the name, even if he agreed to performs as "Sin and Sacrifice of Christain Death" at first.
Who knows how Christian Death could have evolved if Rozz stayed in the band...

So 25 years ago was the Path of Sorrows.