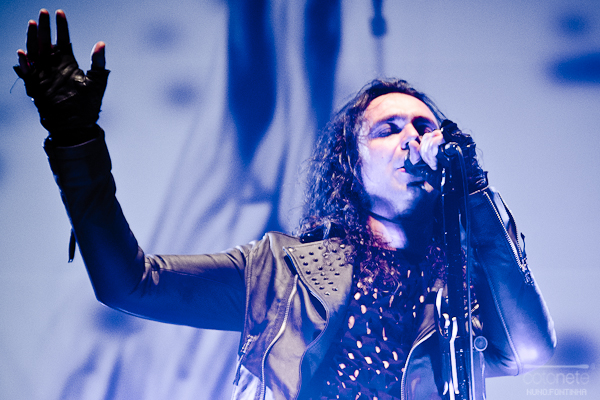 Here's one I posted on DIME. It makes sense to posted here also. Portugal's pride in everyting related to dark music.

A very special night of presentaion of their new double CD "Alpha Noir/ Omega White" with both records being played entirely in two diferent sets, completed with songs from the band's back catalogue that were close in aesthetic. Most of these songs won't be played live regulary (If ever again) at least for the time being, as the bands tour for this year is mainly festivals.

The stage was changed inbetween both sets, in the first part it was only the band with littledecoration on stage but lots of pyrothecnic, second part had three video screens with that projected films that were made by students of a portuguese video school. The videos were simple but extremely effective and gave the second set a readically diferent look. The pyrothecnics were substituted by falling "snow" on this set.

The band seemed less at ease with the "Omega White" material and Fernando decided to introduce all the songs almost from the begining, he seemed almost apologetical about the songs (don't know why, that album contains some of Moonspell's best songs in a decade). this is accentuated by the furiously speedy version of "Opium" (2:30 minutes only, probably the fastest version ever) that immediatly followed the last Omega song.

On the second set, the band was joined on stage by Carmen Simões (Ava Inferi) and Silvia Guerreiro (Godspeed Society) and Opus Diabolicum (two cello players).

The venue was full and the response to the public was quite enthusiastic to the new material. Fernando Ribeiro talked a lot, introducing songs, explaning some of the contents of lyrics and introducing the concept of the double album,I edited those talking parts into full tracks because they're in portuguese (Moonspeel native language), meaning that most of you won't understand what he says and maybe want to leave them out if burning a CD or doing a playlist.

Buy the new record "Alpha Noir" with the Bonus CD "White Omega", it really is worth it!

Do Not Sell!!!
For sharing puposes only!
Support the band by going to the concerts and buying merchandise.