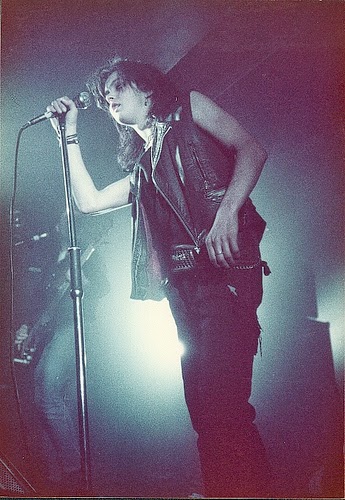 Excellent FM broadcast. Thanks to Fredheadset for sharing this one.

Recorded and broadcasted by VPRO Radio.

A remarkeable festival with an amazing line up. Some of the bands and artists that played don't exist anymore , others still do or have reformed/reunited. Some of the bands have already been seeded by me, like, Clock DVA,  and some have been seeded by other people. There is plenty more out there on the internet and maybe you'll run into them. Unfortunately a lot can be downloaded in a lossy form (mp3).

These recordings are all in FLAC and have been hiding themselves for decades on my old cassette tapes. Before they all start pulverizing I have to share them !

Of some of them I only have snippets of the whole concert. Some songs fade out (due to the news bulletin blips). Some tape hiss may be audible or some FM static.

The Danse Society were a postpunk group from Sheffield, United Kingdom, active from 1981 to 1987.  They achieved moderate fame during their short career. The forerunners of The Danse Society can be found in 1979 when Steve Rawlings (voice), Paul Gilmartin (drums), Paul Hampshire (known as Bee) (keyboards), Dave Patrick (lead guitar) and Bubble (bass) formed a band simply called Y? which had the track 'End of Act One' included in the compilation 'Bouquet of Steel' released in early 1980. By 1979 Lyndon Scarfe and Paul Nash had a band called Lips-X, the mutual ideas with the people of Y? lead to the joining of both bands by June 1970 to form the real forerunner of The Danse Society, a band called Danse Crazy. This band played at the Futurama Two Festival (popular name for "The World's Second Science Fiction Music Festival") held at Queen's Hall, Leeds in september 1979. Other groups playing at that festival were: Joy Division, Cabaret Voltaire, A Certain Ratio, OMD , Public Image Limited, Soft Cell among others. The complete festival was filmed by the BBC and in november ot 1981 was aired. Danse Crazy were shown playing 'Sink', although they were listed as The Danse Society. A few days before they played at Futurama, the band was in studio and recorded two tracks 'There is no shame in death' and 'Dolphins', shelving them for a future release.

The Danse Society were formed in January of 1981 when Bee left Danse Crazy. He was later involved in other bands such as Panache, Getting the fear and Into a circle. Patrick also left. The four remaining members went on with the band bu by March 1981 they changed the name to The Danse Society. The first line-up were Steve Rawlings (voice), Paul Nash (guitar), Lyndon Scarfe (keyboards), Tim Wright (bass) and Paul Gilmartin (drums).

In September of 1980 they recorded their first 12"; it was called 'There is No Shame on Death' although it was shelved, releasing 'Clock' instead, on their new own label SOCIETY RECORDS.

"Clock / Continent was originally released as a one off 7" single with a pressing of just 1000 financed by the band. We each of us put in about £200 to paid for the recording, pressing etc. and I designed the sleeve which was a wrap around white card with lyrics printedby my girlfriend liz at the local college ( she later became my wife! ). This was then inserted into specially made plastic bags and had an interesting clock logo for the label of the 7". The single was subsequently re-released, with a different sleeve and label and I believe the origional is still hard to come by. It was never released as a 12", although we did used to play longer versions of it live.

With a contract with PAX RECORDS 'There is No Shame on Death' finally saw the light and the first 7" ('Clock')
was re-released in March of 1981. Soon after, and prior to breaking the contract with PAX RECORDS in the same 1981,  they released a 12" 'Womans Own' ,which contains 4 songs recorded as Peel Sessions, and a 7" 'We're so happy/Woman's own' , edited both by PAX and SOCIETY RECORDS.

By that time they were respected by public and musical press mainly due to their great live shows. Their tunes, with Steve's typical distance voice and painful atmospheres, excited a public who found them far more accesible than other gothic bands.
Their popularity quickly grew up as their shows improved. One of the reasons of their quick succes was the opening of several shows for major goth bands like UK Decay, Killing Joke or Theatre of Hate.

Their musical career reached mature in 1982, when a six-tracks album 'Seduction' was released by SOCIETY RECORDS. This record contained only 6 songs but with the initial copies it was given a free bonus 12" with two remixes of the most classical song of the band: 'Danse/Move'
A rare tape of that musical moment was edited semi-officially by the fan club. You can read Paul Nash´s comment on that:

"As far as live stuff goes there was only one official / unofficial live tape - released entirely through the fan club, of a gig at The Hague in Holland containing mainly the seduction album stuff. Again not many copies were done so it's pretty rare"

The succes of this work was big enough to make the band a point of interest for some major labels. Soon after releasing their last independent single, the glorious 'Somewhere/Hide' (December 1982), the band signed to ARISTA in January of 1983.

A compilation of all their first singles was also released with the homonimous title 'The Danse Society'. It was edited in two different versions during 1983, one in Canada with a free bonus 12" and a simple edition in France.

The first singles with the new major label didn't deceive, they were even better than the past material. 'Wake up' released in June of 1983, and mainly the great 'Heaven is waiting' brougth them to the top of their popularity.

Their new major album appeared in December of 1983. The record was called 'Heaven is waiting'. A different edition of this record by Great Expectations can be found. This edition and adds four songs to the common edition by ARISTA, although it seems to be from the early nineties.The album contained great tunes like 'Red light', 'Where are you now', 'Come inside', or the two previous singles 'Heaven is waiting' and 'Wake up'. It also contained a song which, according to musical press opinion, didn't fit with their style: the epic version of  the Rolling Stones '2000 light years from home', also edited in 1984 as 12" and as a limited edition double single.

During 1984 they toured extensively to promote their record, even playing in Madrid and Barcelona. A good venue during this tour took place on Thursday April 7th of 1984 in the Hammersmith Palais in London, sharing the night with the German band from 4AD X-Mal Deutschland.


Although they published two more singles, the interest of the public and critics decayed. 'Say it again' , published on May of 1985, with a bunch of remixes is an aproach to a more commercial sound. Fortunately the b-side 'Fade away (she's in your dreams)' deserves to buy this single. Another single, 'Hold on (to what you´ve got)', was published on 1986 and althoug being a good song did not reach the charts. In the back sleeve of this single a new album is promised, to be called 'Heaven again'. Rumors said that as the sales for 'Heaven is waiting' were not as good as expected by ARISTA this project was deleted. Anyway, you can read what happened to the band in the own words
of Pau Nash (guitarrist of the band):

"the album "Heaven Again" that was mentioned on the back of the "hold on" single was never released -it was in fact a mixture of new and old tracks re-recorded and was intendedas a 'stop gap' album whilst we wrote some more material for a new album,which more than likely would have been something on the lines of "looking through". However from recording most of the tracks for the "heaven again album we bust up with Arista and the album was never properly finished, and as you know we were touring heavily at that time. In fact the "looking through" album was only intended as a series of demos designed to get us a new deal with another record company - Virgin and Geffen were both interested- but nothing came of it. Anyway we decided in the end to release the demos as an album on our original Society label, rather than do nothing.This was just before Steve left the band. After that we recorded some more demos and toured with a new singer - Mark from 'Music for Pleasure' ( Dave Whitaker's old band ) before it all finally fell apart"

As you can read above the career of the band was closed in 1987 with the release of a new record, 'Looking through', edited by themselves in Society Records. This records could be found with an inner sheet including the sleeve of all the records edited by Society. After the release of this record Steve Rawlings left the band and, although the other members tried to go on with another singer,
the band finally split forever. An attempt to follow with a nother name, "Johnny in the clouds", did not succeed. More information on the band, the forerunners and also their last days will be someday reviewed by Paul Nash, as he's now preparing some web pages about all that (that's what he said by mid 98!).

In 1987 a single was released with the name of Society, 'Saturn girl'. In front of this project there was Steve Rawlings, with his characteristic voice. The musical style of Society was more rock and funky than goth, with a lot of technology and good ideas, maybe too many as nothing else came of that.

Setlist for this gig :

Another one from the box of old tapes !

htGI2lojNwJIo
Posted by circle at 12:29

Email ThisBlogThis!Share to TwitterShare to FacebookShare to Pinterest
Labels: The Danse Society