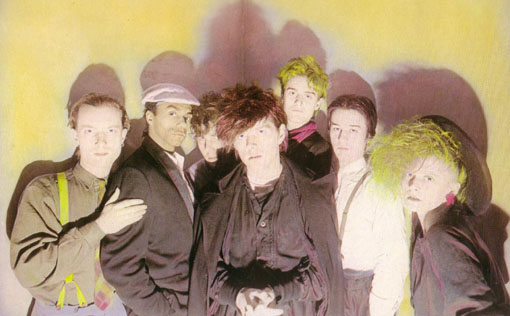 An excellent gift by Christian, who sent me this soundboard recording to share here, here's some info about it, that he was kind enough to share:

The Thompson Twins were pretty much pop in the mid '80s, but their early incarnation was something else - a seven piece as opposed to a three piece.

A few years ago, a concert came to light within the Thompson Twins collectors circle that had pretty much been unknown. It was the Thompson Twins recorded live at the Nite Club in Edinburgh, Scotland on the 17th of February, 1981.  This turned out to be the earliest known live recording - a complete concert - by the then seven piece.  Up until 2018, the earliest known live recording was the First Session 12" (12th February, 1981), but that was just four tracks and performed in a studio for the BBC.

What's great about this show is that it contains some tracks that have never had a studio version put out (Physics And Chemistry) as well as performances of a couple of their earliest singles (Squares And Triangles, She's In Love With Mystery and Fast Food).  This concert was on a reel-to-reel tape.  The collector who got this had to do a bit of restoration, but not much.  The first song that was on the reel-to-reel was the ending of a song by a group called Everest The Hard Way (listed as track 00 in the flac folder).  This song was left on there to preserve the posterity of the show.  This show is a great glimpse into what they were before hitting it big and pairing down to just three people.

The folder is dated 14th of February, but the date of the concert is 17th of February as shown by the advert of the tour featured on the art folder.