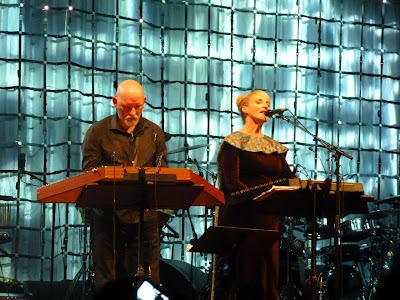 Another recording from the 2012 tour, again thanks to ianmacd for sharing it.

Most European fans won't yet be aware that I released the recording of the
Brussels concert shortly after midnight last night, but I'm already on the ICE
train to Frankfurt for the band's first German gig of the tour.

Unlike most countries, whose entire populace must compete for tickets to a
single gig, German audiences will be enjoying the luxury of no fewer than five
performances within their country's borders.

I will attend only two of the German dates, the first tonight in Frankfurt and
the last, a week from today in Cologne. The others are too far away from
Amsterdam, making it impractical to return home between gigs. Well, I suppose
Hamburg's not too far away, but I shouldn't really dwell on that thought.

The German gigs probably have the distinction of counting amongst their ranks
the most expensive gig of the tour, too. My ticket for tonight has a face
value of EUR 71. Compare that with Athens, for example, where tickets were a
mere EUR 28. I know neither who sets the prices, nor the reasons for the huge
differences, but I'd be interested to find out.

I settle in for dinner at the Operncafé, just across Opernplatz from the
imposing Alte Oper. My table affords me a direct view of tonight's venue. The
sun is setting and casting its golden rays across the top of the building. If
it's as beautiful on the inside as it is on the outside, we're in for a treat
and it might help to explain the high entrance fee.

While I'm waiting for my food to arrive, I get a call from Jirka. He's been on
a train from Prague all day and has just arrived at the Hauptbahnhof.

A few minutes later, he materialises at the restaurant. It's really good to
see him again after our recent adventure together in Beirut. It was just two
weeks ago that we sat in the Roman Amphitheatre at Zouk Mikael and experienced
the magic of Dead Can Dance under the stars, but it already seems much longer
ago now. There are lots of great memories to reminisce about, as well as
tonight's gig to discuss.

Soon after Jirka, Timo turns up. Timo seems to personally know about half of
the people attending tonight's gig and has close to twenty tickets on him to
distribute amongst his friends.

Timo also knows the venue well and advises me that I have a less than ideal
seat for the purpose of recording the gig. Not only is my seat in the front
row, with no direct path to the PA system, it's also at the aisle of the
centre block, which means I'll be in plain view of the security staff who sit
nearby and scan for miscreants such as myself.

According to Timo, venue staff regularly prevent concert-goers from even
taking photos with their mobile phone, so it sounds as if I would be well
advised to avoid attracting any unwanted attention. I therefore decide to
exchange my front row ticket for one of Timo's in the fourth row. Slightly
further back would be better yet, but that's the trouble with seated gigs: you
usually can't choose where you sit.

Timo needs to set about distributing the remainder of his tickets, so he
leaves Jirka and me to finish dinner.

Having also purchased a seat upgrade from Timo, Jirka must now stand outside
the venue and attempt to sell his original. Unlike at other dates on this
tour, this proves easier said than done tonight. There are a surprising number
of people milling around outside with hand-penned signs advertising a 'Karte
zu verkaufen'. It appears to be a buyer's market and people are baulking at
the idea of paying even face value for entrance to a sold-out gig.

The clock is ticking, so I leave Jirka to it and head inside the venue to
configure my microphones for what will undoubtedly be a very sharp angle to
the overhead PA. We reunite in the foyer about ten minutes later, Jirka having
succeeded in selling his extra ticket without incurring a loss.

The opera house's gong is soon warning people to take their seats, so Jirka
and I head up the two flights of stairs to the Großer Saal.

Anyone who thinks that the people here this evening probably wouldn't have
much in common with your typical opera house crowd couldn't be further off the
mark. The people of Frankfurt (I feel silly calling them Frankfurters) are
dressed to the nines tonight and there's a significantly larger gothic
contingent here than I have seen in other cities on the tour. Goth subculture
obviously still thrives in Germany and some people have put a lot of effort
into dressing up for, well, a night at the opera.

I take my seat in the fourth row. Now, this is more like it: wide, comfortable
seats with lots of leg room at the front. We're travelling in business class
this evening!

David Kuckhermann is up first, of course. He plays his now familiar solo set
on the hang and the riqq, but is joined on the closing piece this evening by
Holger Raddatz, who plays soprano saxophone. The sax adds a jazzy air to the
work, recalling Portico Quartet, who also mix hang with sax to pleasing
effect. I record David's performance, of course, and it takes its place at the
back of the queue of material to be processed and uploaded in due course.

The Dead Can Dance set that follows at the strike of nine o'clock is second
nature to me now, as familiar as any album. As each song finishes, I can
already hear the opening bars of the next in my mind's ear, before it has
started.

After the first few songs, it becomes obvious that there's some kind of
technical problem with the sound this evening. Well, I say "obvious", but it's
only obvious because of Brendan's consternation with a malfunctioning foot
pedal. I can't actually hear anything wrong with the sound.

It's unclear to me whether the pedal failed during a song or perhaps hasn't
worked from the moment the band came on stage. I haven't noticed anything
unusual thus far. As the evening wears on, however, Brendan periodically
glares at the pedal in disgust, shaking his head in annoyance. Nevertheless,
when Richard Yale finally comes on stage with a replacement pedal, Brendan
shoos him away.

I finally become aware of an issue with the sound during the introduction to
'Sanvean'. The synths sound strangely weak and watery. The sound is so odd, in
fact, that I fully expect the band to abort the song while the problem is
fixed. To my surprise, though, they don't.

Perhaps the strange quality to the sound isn't as obvious from where they're
standing; or perhaps they're choosing to simply continue with the show, rather
than put pressure on the remainder of the set by pausing to fix the problem.
In any case, Brendan isn't on stage during 'Sanvean', so perhaps he's unaware
of just how different the song sounds tonight.

After a couple more songs, it's the turn of 'The Host Of Seraphim'. At first,
I think there's something wrong with the sound again, because Brendan's voice
sounds a little too high in the mix, but it's just Lisa starting softly. The
song meets with another rapturous reception from the German audience.

I suspect that people all over North America and Europe have been naming 'The
Host Of Seraphim' as their highlight of the 2012 tour. It would be hard to
disagree with them, too, as the song is undoubtedly one of the finest, most
emotional vocal performances ever delivered by Lisa. If you don't feel your
inner being stirring during this number, you should check yourself for a
pulse.

What happens next qualifies as one of the weirder moments in my long history
of attending Dead Can Dance gigs.

As at most of the gigs on this tour, Brendan introduces 'Ime Prezakias' and
informs the audience that the literal meaning of the song's title is 'I'm an
addict'. The band then start to play the song, but as they do, Brendan drops
his usual air of seriousness and says to the audience, "Put your hands in the
air, people. Come on! Let's have a good time!"

It's an incongruous moment, this impromptu interaction with the audience, and
I don't think I've previously witnessed the like of it at a Dead Can Dance
concert. I look across to Lisa and then scan the face of each of the other
band members in turn. Every one of them is grinning at this spontaneous
departure from the usual formal script.

The crowd don't need to be asked twice and 'Ime Prezakias' hereby turns into
an interactive, clap-along celebration. The sheer unlikelihood of the scene
makes it a humorous and welcome diversion, enhancing, not distracting from the
performance.

What's next? Brendan shouting, "Come on, Frankfurt! Make some motherfuckin'
noise!"? No, it's never going to get quite that crazy around here. We've had
our laugh for the evening and now it's back down to planet earth.

'All In Good Time' closes the main set. Brendan really gives it his all this
evening. The lyrics hold him in their grasp as he sings them, the song
clearly one of great personal meaning for him. It's a superb rendition.

Finally, we have the standard three encores, with 'Song To The Siren' once
again a personal highlight.

Lisa's parting words to us after 'Rising Of The Moon' are "Goodnight, you
darling things. You've been so patient." Perhaps it's a reference to the
difficulties with the sound. Who knows? Judging by the crowd's response,
however, no-one here feels short-changed tonight.

After the gig, Jirka remarks to me how disappointed he was that the marching
drums on 'Return Of The She-King' were sampled, not played live. It's the same
remark that I made after hearing the song performed live for the first time in
Utrecht a week ago. It's positively crying out for those drums to be played
live.

We say goodbye to Timo in the foyer and then go for drinks at the simply named
Brasserie on the far side of Opernplatz. As we enter, we notice Astrid
Williamson having a drink with someone at the table by the window.

While we're talking, Jules Maxwell comes in and joins Astrid. We wonder
whether any more band members will show up, but they don't.

It gets far too late, but Jirka's good company and I'm not sure when I'll see
him again. After we say our goodbyes, there's still enough time for a few
hours' sleep before my morning train back to Amsterdam, so I put on my
recording of the gig as a lullaby and fall asleep to it within minutes.

In spite of a few difficulties with the sound on stage, it's another excellent
recording from the rig that I purchased several months ago for the express
purpose of recording this tour. The five recordings I have made so far more
than justify the decision to upgrade. I could not be happier with the results
that I am getting. Five gigs and five great recordings: I hope my winning
streak continues.

The recording of Frankfurt is comparable to the others I have made on this
tour, if perhaps a little more cavernous in tone, due to my forward location
and its position relative to the PA. It's also a big place, with a capacity of
2,500 people.

As always, differences in recording location, venue acoustics, band
performance and audience response will dictate your preference, but this
recording is worth it for 'Ime Prezakias' alone.