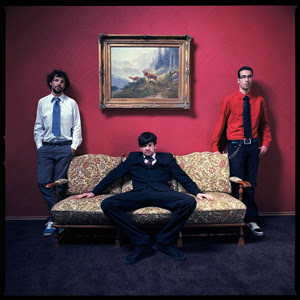 Die Rostigen Loeffel (English translation: The Rusty Spoons) have a new EP out and you can check it on their bandcamp page. If you like industrial/EBM music this is definitively for you. I liked it a lot and I'm pretty sure this band will interest most of you.

First two tracks and the 4. are co produced by Chris Peterson of DECREE, FRONT LINE ASSEMBLY


You can also see a Video teaser on Vimeo:

In 2005 Stefan Banas started a one man band under the name Die Rostigen Löffel. Abduallah Khaldy joined as a bass guitar player soon. In 2007 the first release, the album “Paranoid” was released on the chunk records label. In 2008 the album plakativ (on chunk) and in 2009 the EP artificial stupidity (krautnoise) followed.

In 2007 Stefan Banas won a remix competition hosted by Martin Atkins for the song “Suck” (feat. Trent Reznor on vocals) by Pigface.

After this Stefan worked on with remixing for Martin Atkin’s label “Invisible” for Bands like “Pigface”, “Damage Manual” and “RX” (a side-project of Nivek Ogre of “Skinny Puppy” and Martin Atkins). Further remixes for bands like Armageddon Dildos/The Virgin Dolls were also released commercially.

In 2010 Ingo Blue joined Die Rostigen Löffel. The “band” started to write new songs and did also remixes for bands like Unit 187/TyLean.

Currently Chris Peterson and Die Rostigen Löffel are working on the follow up record of artificial stupidity.

http://www.dierostigenloeffel.de/
Posted by circle at 09:21