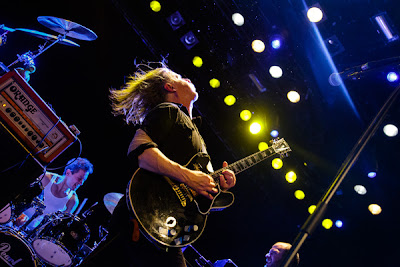 Beyond excellent audience recording! HUGE Thanks to ianmacd for sharing it on DIME. Absolutely a must have, I'm pretty sure that if this gets to Young God Records, it will be released by them, maybe we should think about it :)  As usual, the taper's notes are a real treat also.

I hadn't seen Swans in 23, maybe 24 years. My friend, Ain Rada, suggested that
I go and mentioned to me that the band would be playing in Haarlem in just
over a week. Well, why not?

Unrelenting. Uncompromising. Brutal. Such words are often used to describe
Swans live. They are accurate, but have been dulled by overuse on bands who
relent, compromise and are less brutal. Consequently, they only scratch the
surface of Swans; offer but a mere hint of what one may expect.

But first things first. Support tonight comes from the incredibly prolific Sir
Richard Bishop, who is clearly as mad as a hatter and, one suspects, not a
knight of the realm. "Enjoy your hearing!" he cheerfully and blackly
encourages, '...while you still can' being the subtext he omits.

His virtuoso acoustic guitar is at odds with what is to come and not
everything he plays manages an equal hold on my attention, but when he bellows
out some twisted folk tale amongst his instrumental numbers, it's the stuff of
madness and a fitting preamble for the main attraction.

Swans file on stage to Johnny Cash's 'If I were A Carpenter'. It's quite the
contrast with what is to follow. As if making some kind of obscure statement,
they start to play over the top of it, like an ungodly high-rise block of
flats being erected atop an ancient burial ground.

Michael Gira's monster builds up steam during the unreleased, still
germinating 'To Be Kind'. The piece (it would be absurd to refer to anything
Swans have spawned as a 'song') eventually explodes with megatonne force,
sending a shock wave rippling through the room.

Swans have shown their hand. We now know the intensity of what we will be
dealing with tonight, but not yet its scope.

For more than two hours, the music has its wicked way with me. There is only
the barrage of noise. All else ceases to exist. Every pore of my being is
penetrated by the all-consuming sound.

I stand a few metres from the PA and feel kinship with those television
reporters you sometimes see, staggering to remain on their feet as the
hurricane they are reporting on makes landfall.

I wonder whether one of my organs might resonate into destruction or some limb
surrender and spontaneously detach. Some music you listen to, but this is
music you feel. This is physical violence translated into sound, an aural rape
of its willing victims.

'Can microphones be damaged by loud noise?' I hear myself wonder. I will find
out.

It's lonely down here near the PA. A girl next to me writhes in pleasure. I
close my eyes and bathe in the floatation tank of noise that is Patronaat
this evening. When I open them again, someone is taking a photograph of me.
It's that kind of night.

Swans are the meat grinder of music. Insert into the top of the machine all of
the unspeakable ugliness in the world, turn the handle and out comes Swans'
sonic onslaught at the other end. You're then made to eat it raw.

This is the music that NASA should be sending into space as a message from the
people of planet Earth. This is all that we see or seem, filtered through
Michael Gira's troubled conscience.

The jewel in the crown is 'The Seer', not so much extended tonight as drawn on
a rack until this one piece grows longer than many an entire gig I attend.
Gira repeatedly spits into the air during its cacophonous climax, a shower of
nebulised saliva raining down on him and his hapless bandmates.

It's not clear whether 'The Seer' will ever end, that the band know how to
harness the beast they have unleashed, or that we should even care. It finally
crash-lands after more than an hour, juddering to a halt like a derailed
freight train reaching the bottom of an embankment.

"We are finished", announces Gira, and the band take a bow or three. So are
we, Michael; so are we.

Out at the merchandise stand, I avail myself of the band's latest CDs. A
T-shirt sports the legend:

That says it all. I buy one. I should have bought one for every day of the
week.

Gira suddenly appears in a huge cowboy hat. I have him sign one of my CDs. I
don't know why. He's there. Why not?

As I leave, I wonder whether the recording has turned out well, so that I can
subject myself to the humiliation again whenever the mood takes me.

It takes me several days before I have ploughed through the queue of
recordings to be mastered and completed work on the one you now hold before
you. Good things come to those who wait.

Any attempt to record Swans (or any live band, for that matter) is essentially
a forlorn endeavour to capture lightning in a bottle. And any artifice that
allows you to regulate Swans' volume arguably misses the point entirely.

Nevertheless, I'm pleased to say that the recording has turned out
magnificent. You will imagine you are listening to a soundboard source at
times, such is the distance of the attenuated audience after setting the
correct microphone input level. Not that they made a lot of noise, anyway,
after being pulverised.

In the absence of an official live recording of the 2012 tour, this will
certainly suffice. I hope you 'enjoy' it, too.


Go Look Somewhere Else
Posted by circle at 13:56

Email ThisBlogThis!Share to TwitterShare to FacebookShare to Pinterest
Labels: Swans