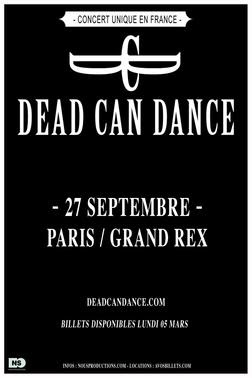 I was asked by email why I had't post this recording still and actually the only answer I could come up with was that it got left behind amist the flood of recordings from ianmacd of DCD concerts. So here it is, sound is excellent as usual, and as usual a big THANK YOU to ianmacd for sharing his recordings.
RECORDING:

The offer of a first-rate ticket for Dead Can Dance's sold-out show in Paris
isn't one that I had to contemplate for very long, and I soon find myself
squeezing another appointment onto a gigging calendar that is already starting
to resemble a chessboard.

Just a few days later, I am speeding towards the French capital at 300 km/h
aboard the Thalys train from Amsterdam, equipped with luxurious, sporadically
functional Internet wi-fi.

My concert ticket comes courtesy of Timo, who's a bit late to the brasserie
where I've settled down for dinner, near enough adjacent to Le Grand Rex. As I
await his arrival, I engage in the delightful traveller's pursuit of
people-watching, marvelling at the undeniably stylish Parisians going about
their lives, being so effortlessly Parisian.

The café culture here is second to none and I'm instantly and emphatically
reminded why I love this city so much, with its fabulous architecture and air
of genuine sophistication.

We'll conveniently ignore for the purposes of my idyllic sketch the mayhem of
the city's deafening traffic and insanely busy Metro. As I make my way across
Paris, packed into a train with the other sad-faced human sardines, I'm
reminded of a life far away from here in time and space, before I escaped the
rat race of the English capital and found a better life elsewhere.

If you find yourself in this part of Paris in the near future, I strongly
recommend Brasserie Le Madeleine Bastille's crème brûlée. It's one of the best
I've had in quite some time.

When Timo finally arrives, we greet each other like old friends, though we
would more accurately be described as casual acquaintances. I last (and first)
saw him more than seven years ago, following Dead Can Dance's April 2005 gig
at The Forum in Kentish Town, the last concert of their European reunion tour.

After drinks, we cross the side street to the venue, where an improbably long
queue of people are waiting to go inside. A few ticketless optimists pace up
and down the line of waiting fans, a hastily scribbled 'cherche place' placard
clutched to their chest.

Le Grand Rex, capacity 2,650, had sold out within 10 minutes of the tickets
going on sale, perhaps the fastest sell-out of the entire tour. Rather
unfathomably, it's the band's only concert in France this time around and
people have come from far and wide to partake. One suspects there must be at
least as many more fans who didn't manage to get their hands on a ticket.

Finally, the queue is whittled down and we enter into the venue.

In the foyer, I exchange a T-shirt purchased in Utrecht that turned out to be
too large for me. Watch out for the American Apparel shirts: their sizes are
larger than the others on sale (and at least some of them are not pure
cotton).

The slowness with which the audience were ushered inside the venue tonight has
the unfortunate consequence that David Kuckhermann has already started his
supporting set by the time we make it inside. In fact, he's close to finishing
it. His performance apparently started on time at 20:00 sharp while Timo and I
were still somewhere near the back of the queue, so I'm afraid I won't be able
to offer a recording of it. Perhaps someone else managed to capture it.

After a brief sojourn in the taper's dressing-room (i.e. the lavatories), our
first-rate tickets turn out not to be quite so first-rate after all. They are
not for the stalls, as Timo was led to believe, but the mezzanine. Bummer.

To borrow a line from Lady Gaga in Amsterdam a couple of weeks ago, it's
hotter than a horse's cock up in the mezzanine; hotter, even, than the tour's
opening night in the Roman Amphitheatre of Lebanon's Zouk Mikael, where the
faintest wisp of a Mediterranean breeze wafted through the amphitheatre and
kept things comfortable.

There's no such breeze here, and Le Grand Rex's seats are none too wide,
either. I check my ticket, half expecting it to say 'economy class'.

None of this concerns me for very long, however. I'm here in good company and
I'm about to see Dead Can Dance perform in the illustrious surroundings of an
old Parisian theatre. La vie est belle.

The band come on punctually at 21:00 and proceed to work their way through the
same set as in Utrecht two days ago.

My position in the mezzanine does afford me a nice view of the full stage,
including the band's very attractive light show, the main component of which
is a curtain comprising a grid of hollow squares. In every corner of every
square is a light, and the various ways in which the curtain is illuminated
throughout the evening make for a very atmospheric display. It's the perfect
complement to the music and whoever chose it really knew what he was doing.

Another advantage of the mezzanine is that I am seated high enough for once to
watch the hands of the keyboard players at work. All in all, the mezzanine's
not a bad experience. I wouldn't want to be up here every evening, but for a
single night, the different viewing angle presents a new perspective on a now
familiar show.


There's very little banter this evening. Neither 'Lamma Bada' nor 'Ime
Prezakias' receives an introduction and the band efficiently plough through
the set with only very short pauses between songs. I surmise that there's
probably a 23:00 curfew in force at this location and the band's full three
encore set reliably clocks in at two hours, so there's no time for idle
chatter.

Musically, it's the tightest performance so far of the three I've seen on this
tour. There are fewer mistakes tonight and all of the band's cogs and gears
are now quite worn in, each moving part having adapted to become a perfect fit
for the others in the machine.

As enjoyable as the new songs are, the impression one is left with on hearing
them performed live is the same that forms when listening to the album.
'Anastasis' isn't so much a band album as it is a Brendan Perry solo album
with guest backing vocals from Lisa Gerrard.

Proving that the impression is more than mere subjective interpretation,
recent interviews with Lisa confirm that Brendan wrote _all_ of the music for
the new album, with Lisa flying in at the end to record some vocal tracks.

In this regard, 'Anastasis' feels like an 80/20 collaboration between the duo,
whereas every previous album had consistently felt closer to 50/50.

Lisa stated in interviews her intention to compensate for her passenger status
on the album by throwing herself into the live renditions of the new songs
and, it has to be said, I think she largely achieves this.

Reliably on cue, Lisa hugs Jules Maxwell and blows kisses to Astrid Williamson
after they accompany her with flawless renditions of the songs with
particularly tricky time signatures.

Before closing the main set, Brendan dedicates 'All In Good Time' to his
recently deceased nephew, whose family are in the audience tonight. It's a
touching moment and a welcome reminder of the man's humanity.

Before taking her leave of us and walking off stage, hand in hand with Jules
Maxwell after 'Rising Of The Moon', Lisa informs us that we "are so special".
It's the first time that I have heard her speak to the audience on this tour,
even if it is to utter her signature parting line.

After the gig, Timo and I adjourn for drinks and discussion of the gig and
recent events on Brendan's forum. As we're leaving the venue, I spot Brendan's
wife swimming against the current of punters making their way to the street.

By the time we wind up our post-gig conviviality, the Metro has long since
stopped running and it will be a long walk through the streets of Paris before
I reach my hotel.

As I soak up the sights and sounds on the way, I resolve not to leave it so
long until my next visit. Paris really is a gorgeous city.

The recording of the concert has turned out very well. I was concerned that my
mezzanine location would have a significant negative impact on the quality of
the recording, but I'm pleased to say that this fear was completely unfounded.

It's my first time using these hypercardioid (i.e. highly directional)
microphones this far back in a venue and, I must say, they excel at capturing
only the sound at source, the PA mounted left and right above the stage. Very
little of the ambient, reverberating sound is picked up my the microphones'
narrow pattern.

Whilst the recording inevitably sounds a little more distant than you may be
be used to from me, this is no bad thing. The quality is on a par with my
other recordings from this tour and should be considered excellent. In fact,
the stereo image of this recording is superior to that of Utrecht and some
people are going to prefer the more spacious, open sound of this recording.

The audience are somewhat more in evidence on this recording than on my
recordings of Zouk Mikael and Utrecht. This is because most of them were
seated in front of me this time, as opposed to behind. I have attenuated the
excessive noise where it was possible to do so without introducing jarring
fluctuations into the listening experience, but at no time does the audience
intrude on the recording. It was a very respectful, appreciative crowd.

My distance from the stage also served to increase the dynamics of the sound,
making for a greater range between the quietest moments of the performance and
the loudest. Setting the microphone input level therefore proved trickier than
usual and resulted in very minor clipping during two or three of the loudest
peaks of 'Kiko'. It's nothing that will spoil your enjoyment, however, and you
will probably not even notice it when it occurs.